A Tale of Two Cents 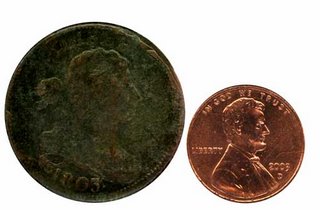 First off, never call 'em pennies. Pennies are found in England and they are descended from the old Roman coin, the 'dennie,' or denarius. Cents are what our coins are officially called. What you see here are two 1-cent coins, side by side. One is a heavy copper slab from 1803; the other is a light piece of zinc clad in thin copper from 2003. They may not be actual size here, but they are to scale. We all know how small today's penny is.

The 1803 cent is thicker than today's cent. I scanned it in while it was still in its plastic sheath. The details were too subtle for my scanner to pick up through the sealed plastic. More detail can be seen with the naked eye. It is rated a VG-8 which means its not in great shape. Still, it's a fairly rare coin and not cheap. I like to look at old coins like this and wonder who owned it and what they bought with it. In 1803 a penny, er, cent was really worth something. For one thing it was worth its weight in copper. America's coins back then were gold, silver or copper. Real money with real intrinsic worth. Another difference between the two coins: "In God We Trust" is not on the 1803 cent. That phrase was added to coins later on. Instead is says "LIBERTY" on the top. I prefer that. Early coins not only were real money, they kept religion out of it too. Today's cent is worth more as melted metal than it is a money. This is why I think nickels and cents will soon be out of circulation. Our money consists of the fiat dollar. It's not a promise to pay nor is it backed by anything. It's merely a slip of paper. Trillions of dollars can easily be printed up at a low cost. Gold, silver and copper require costly mining, smeltering and refining.

Our coins have been down-sized and cheapened. Since our smaller coins cost more to make than they are worth, perhaps soon the penny will soon be made of steel. Maybe we'll see plastic coins?

Whatever the fate of our coins, a good book to read on this matter is "What Has Government Done to Our Money?" by Murray N. Rothbard. All fiat money throughout history has ended up worthless. When the dollar collapses, perhaps the Fed will come to the rescue and replace it with a new ponzi scheme--the 'Amero.'
Posted by Ben Garrison at 11:52 AM No comments: