Posted by Ben Garrison at 1:38 AM No comments:

Hillary's Presidential Race Against Herself 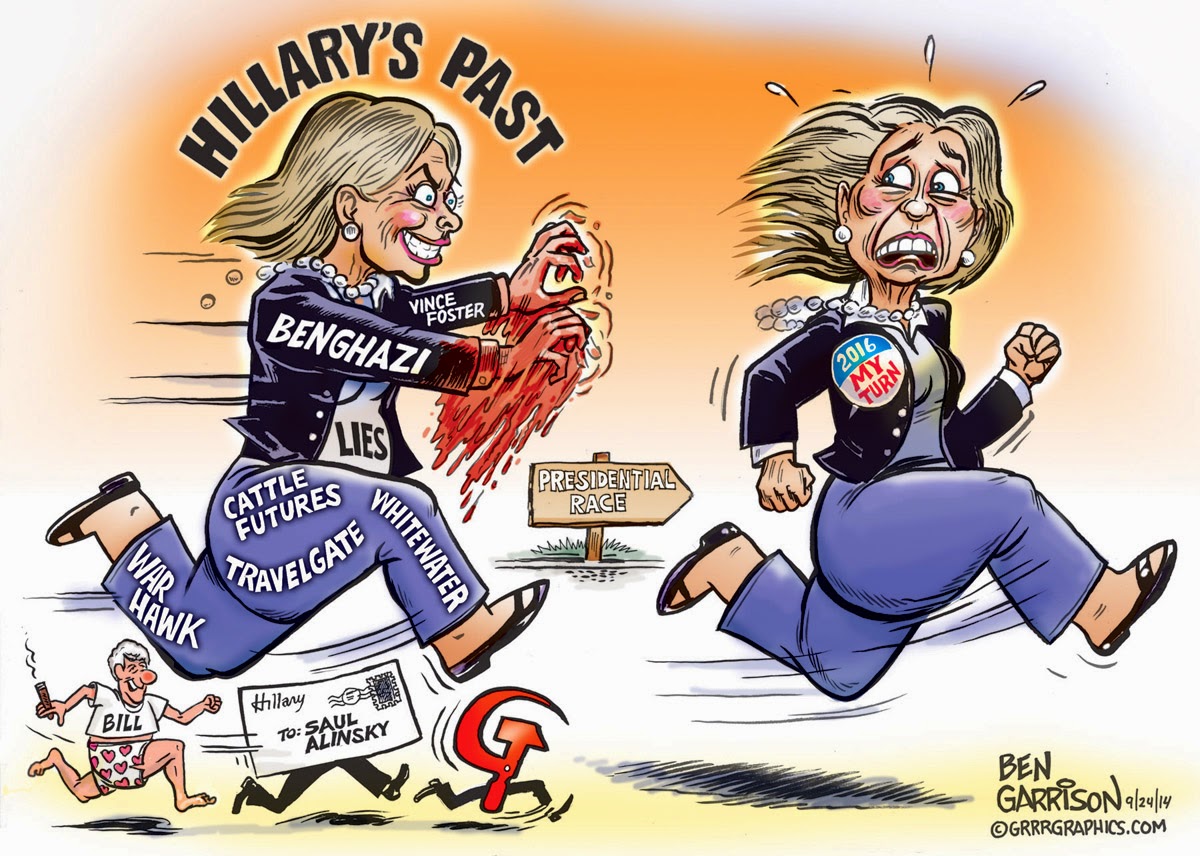 It's Hillary's turn. The CFR, Bilderberg Illuminati and bought-out mainstream media all say so. You will see specials on TV about 'strong women' and you will be groomed to think it's "Hillary's turn." If you disagree, you'll be smeared as sexist.

I'm all for a female presidential candidate as long as she supports the Constitution. Instead, we'll get Hillary. She's pick up where Obama has left off. There will be more war, more taxes, increasing totalitarianism and crony capitalism. The top 1/10th of the one percent will continue to get fabulously richer while the middle class will get poorer.

In short, the same shabby system will continue to be pushed down the road. The Federal Reserve will print money for their friends and the bought-out Congress will continue to rubber stamp whatever tyranny the president has in mind.

Hillary doesn't deserve to be president. It's NOT her turn. There has to be thousands if not millions of people more qualified--male and female. Instead the media will drum it into our heads that it's 'her turn.' She'll be jammed down the nation's throat whether people like her or not. Polls and elections will be 'controlled' to make sure she gets in. After all, 'Her Inevitableness" has all the right credentials of corruption.
Posted by Ben Garrison at 4:41 PM No comments:

Here is a great symphony conducted by a great man--Leonard Bernstein.

Shostakovich was admonished by Soviet 'authorities' to write a symphony that was not 'formalist.' They wanted something easy to understand. They ordered Shostakovich to produce such a work. Here it is.

This came after Shostakovich wrote what was perhaps his greatest symphony--his 4th. It epitomized the emptiness and heartlessness of forced Soviet collectivization, industrialization and police state of the 1930s. The 4th was written around 1936, but the premiere was cancelled. It was not performed until nearly 30 years later. Shostakovich heard it performed live for the first time when he was an old man. The 4th is like a great novel. It is filled with interesting characters and unexpected plot twists. It ends at first monumentally and then mysteriously and quietly. It is not easily understood at first, but gets better with each hearing. The Soviets detested such work and made it clear to Shostakovich that he must produce something simpler and instantly understandable--or else.

Shostakovich delivered the goods. It is perhaps his most popular symphony. The third movement was an elegy to the suffering of the people under the Soviet regime. People listening knew that and many were moved to tears. It is pure Russian poetry.

The last movement is also very Russian and easy to like. The finale in particular was especially easy to understand. After all, Shostakovich was under orders. Listen for the string section at the end. They repeat the same note over and over and over again as if to say, "There. Is THIS simple enough for you?" It was Shostakovich's way of showing contempt for the Soviets and yet the ending is still marvelous.

https://www.youtube.com/watch?v=0FF4HyB77hQ
Posted by Ben Garrison at 10:26 PM No comments:

I sold "Sioux War Party" recently at the gallery in Bigfork. I can't tell you how good it feels to sell a work of fine art. I spent a lot of time on the painting. It was based on a watercolor sketch by CM Russell. I considered the work to be my masterpiece and someone recognized that and bought it. Hurrah! 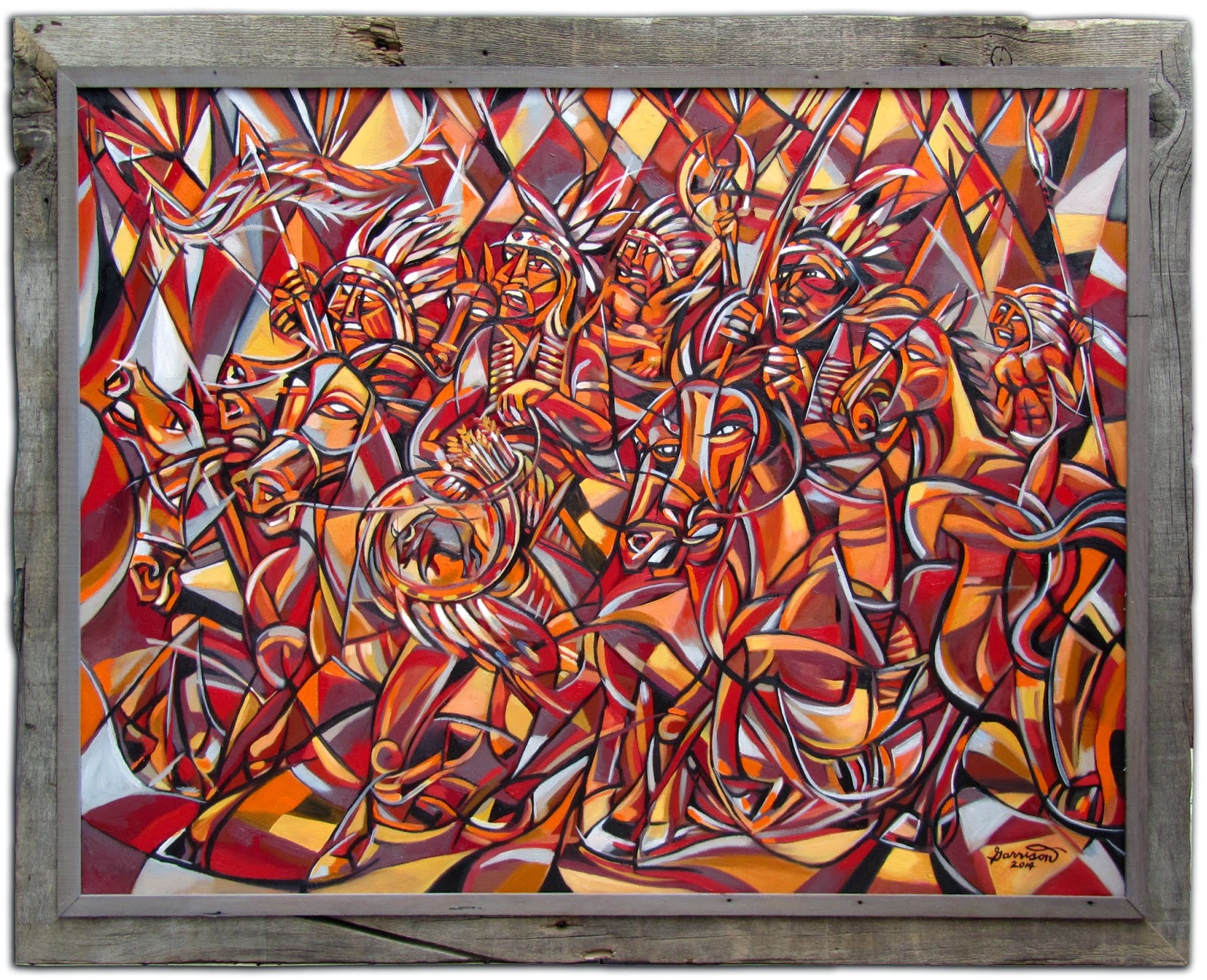 Posted by Ben Garrison at 7:11 PM No comments:

I posted on /pol for the first time today. Yes, it was the real me and this is the proof. For the record, I, Ben Garrison, am neither anti-Semitic nor a Nazi. The hate memes repeated there have nothing to do with me.

It's good that there's a place for unfettered dialogue and expression, but all-too often the conversations are reduced to the lowest common denominator: Hate.

Hate is like a bar room brawl. Instead of having a lively discussion with friends over a beer, all attention gets riveted to the brawl. Conversation ends and hate takes over.

The hate memes must be repeated over and over by their perpetrators. That's why the same hate memes are reposted daily on /pol with mind-numbing regularity. The same 'Jew-meme' character rubbing his hands together is seen hourly. The same Hitler memes are repeated ad nauseum. Day after day. Week after week. Month after month. Year after year. Wouldn't it be more interesting to see posts that escape morass of hate? Hate is not cool. Hate is destructive. Hate is boring. You've been there. You've done that.

4chan is a disgusting snake pit of hate. It's a perpetual 7th grade hell of put-downs and lies. Don't expect it to ever mature.

4chan long ago surrendered to the FBI due to illegal content allowed on /b. It's now a honeypot to snare criminals. That's fine, but it's also being used to smear and discredit those who really do value free speech. Are you a blogger who values liberty and the Constitution? Are you against the unfolding police state? On /pol you can expect to be smeared regularly. You'll be called anti-Semitic and a racist. Straw men and ad hominem attacks are typical tactics used by the far-left who grab the spigot of hate on /pol and aim it at their libertarian targets. Anyone can post using the name Ben Garrison--or any other name. It's a free for all of impersonation, lies and deception. There's no responsibility or accountability there.

Never believe anything you might read on 4chan's /pol. Any so-called 'free speech' existing there operates at a very low level of consciousness. Stay away.

Far left socialists and far right Nazis and trolls of all persuasions in between are routinely defacing Ben Garrison's cartoons. They add in offensive racist and Jewish caricatures, usually drawn by an anonymous racist artist going under the pen name of 'A. Wyatt Mann.' These libelous trolls also stamp the copyrighted Ben Garrison signature onto racist images that Ben did not draw.

They also impersonate Ben by stealing his name and photos and incorporate them into hate 'meme' boxes in order to defame him. They've clearly stated they're out to ruin his reputation and his ability to make a living from commercial art. One of the trolls even stated that he'd like to see Ben get murdered. Ben's family has also been attacked.

Ben Garrison is not against Jews, Muslims, African Americans, Hispanics or any other religion or ethnicity. This is a battle of ideas, not skin color, country of origin or religious heritage. Ben Garrison is against racism, bigotry and libel. Ben is against hate speech on social media where community standards are clearly stated. By 'hate speech' I'm referring to those who want to murder people based on their race or religion. Ben is for free speech and those wishing to express their hatred are free to do so on their own sites and using their own names.

Ben Garrison is for freedom and the Constitution. 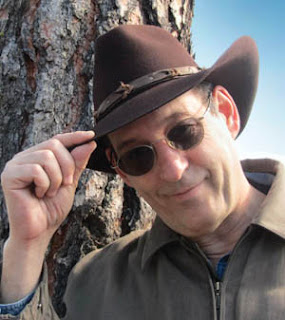 Posted by Ben Garrison at 7:08 PM No comments: