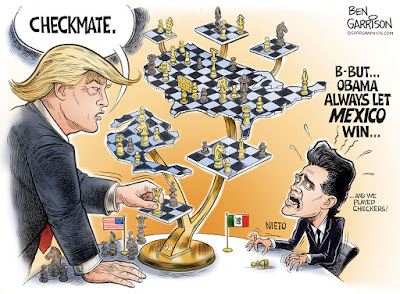 President Trump is off to a good start. So far, he’s implementing his campaign promises and that’s very encouraging. The world may be shocked, but too bad.

The world has grown accustomed to the United States bowing and giving in to demands made by other countries. Trump is a business man who knows a bad deal when he sees one, and for too long he's seen politicians make terrible deals for America. He wants to stop that.

ADDITIONAL: To the moron who keeps flooding my in box with death threats over this cartoon--please know that I use a filter and all your vile messages go straight to the trash where they belong. The message (see snippet below) is typical of the times, though. Don't like someone's freedom of speech and disagree with him? Threaten him with death! The left is losing the argument and so they are increasingly resorting not just to insults, but outright violence. Track me down if you want, but if you want to try to kill me, be aware that I am armed.

"One more damn cartoon about Mexico, and I promise you, conservatives will learn to respect with blood!"
Posted by Ben Garrison at 8:30 PM No comments:

UPDATE: I came up with an idea while listening President Trump's inaugural speech. So I drew it. 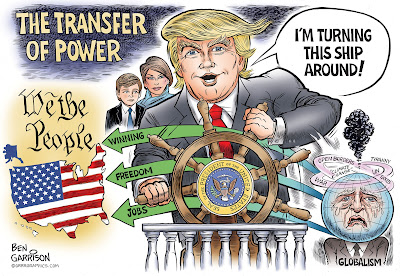 His speech was very encouraging. He reiterated a lot of the core content heard in his campaign speeches. He still placed America first and he wants to make it great again. He assured us all that the American people will not be ignored again. He’s a populist, nationalist president--and that’s a good thing. Don’t let CNN convince you it’s not.

For too long we have endured a president who was bent on dividing and replacing America with the vision held by globalist elites. It’s very refreshing to have a president who tells it like it is. He knows the political elite have for too long reaped the rewards of big government while the American people became more impoverished. Unlike Hillary and the elite establishment, Trump listened. That’s why he’s president.

We have a new captain who wants to ‘right the ship.’ He’ll put our own interests first. Obama put the UN’s interests first. Trump wants to heal our division whereas Obama intentionally made it much worse in order to usher in more collectivism.

And so this is my latest cartoon. I’ve drawn a great many Trump cartoons and now I will move on to other subjects for awhile. I have beern one of the few cartoonists (other than Branco) who drew pro-Trump cartoons. If Trump can close the borders and eliminate the ISIS terrorists, so much the better. However, I think the most important thing he can do is audit and then end the Federal Reserve and return the control and creation of money to We The People. That means returning money creation to Congress where it belongs. Do like Lincoln did—print greenbacks commensurate with production. It’s a good way to pay for all the infrastructure Trump wants to refurbish.

We will now see if 'Captain Trump’ can right the ship of state. He may be our last, best hope.

—Ben Garrison
----------
Cartoon drawn the day before the Inauguration:

I'm a little late with this one, but I don't have the luxury of being a full-time cartoonist like the few remaining ones working for the mainstream media. I also don't draw a giant salary. That's OK--I get to draw whatever I want and my Patreon members and those who buy my prints and t-shirts keep me going. 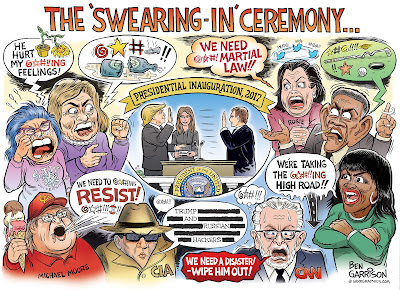 Inauguration day is here. The mainstream media, Hollywood, many politicians and the SJWs remain in a protracted sulk.

CNN continued their non-stop Trump bashing the night before the inauguration. They said Trump had better not try to bully the political establishment because they would be pushing back. They drummed up fear and implied Trump might start nuclear war. Even the weatherman claimed Trump’s hair could get rained on—thus revealing whether it’s fake or not. Well, we know what’s fake already: The mainstream media.
The CNN panelists then proceeded to vigorously kiss Obama’s backside. They called him another Gandhi. Yes, a man who dropped more bombs than any other president in history was compared to Mahatma. They called him a 'philosopher president' because he read books while in office. He should be known as the golfer president.
Obama claimed he ran a ‘scandal free’ administration and CNN eagerly parroted that. It was telling, because the mainstream media have become megaphones for the establishment. They could have found scandals a-plenty, but they don’t do investigative journalism any more. That’s because they are owned by globalists.
If CNN did real journalism they would have investigated Obama’s fake birth certificate and stolen social security number. They would have investigated Benghazi. Obama had Gaddafi murdered and then he and Hillary helped create ISIS. They would have questioned Sandy Hook and ‘Fast and Furious.’ They would have wondered why Obama spent nearly $100 million in taxpayer money on personal, lavish vacations. They would have looked into Obama's horrible Iran deal, including a $400 million ransom payment to that country. Then there was the fraud that was Obamacare.
Never before has the country witnessed such a blatant display of petulant poor sportsmanship. They can’t and won’t accept that Trump has been elected our next president. A liberal on Facebook stated she would not even mention Trump’s name. “He’s not my president!” A liberal relative, who unctuously posted that we must all support Obama, now states we must resist Trump. Michael Moore has said pretty much the same thing, although he’d be better off if he began resisting Ben and Jerry’s Ice Cream. Rosie O’Donnell even cried for martial law in a desperate attempt to stop the inauguration.
Meanwhile, Obama did his best to sabotage Trump including even trying to drum up a war with Russia. This is what Michael, er, Michelle must consider ‘taking the high road.’ 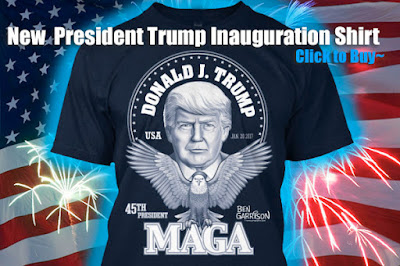 I made a souvenir for Trump's inauguration. It's available on coffee mugs, t-shirts and hoodies and in various colors.

Thanks for your support!

Posted by Ben Garrison at 5:13 PM No comments: 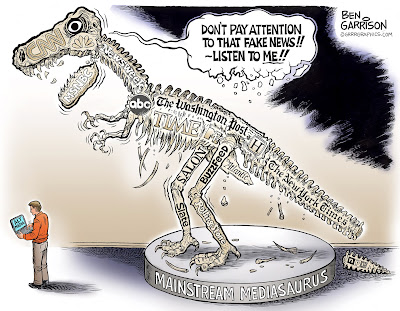 In some corners it’s crudely referred to as “Piss Gate.” It’s a disgusting and completely fictional event that led to the latest desperation exhibited by the mainstream media, who passed the story along as ’news.' When it comes to attacking Trump, they respect no boundary. They have no shame. They are no longer journalists. They don’t bother to do research or basic fact checking. If some prurient rumor affects Trump negatively then they go with it, no questions asked. They have no sense of balance, fairness or decency. Trump was right to castigate CNN. They have degenerated into a fake news outlet. They are shrill shills for their globalist, collectivist masters.

The mainstream media are owned by a handful of global corporations. They are used to having the narrative locked up. They consider themselves owners of the 'final say.’ They think of themselves as ‘authorities’ when it comes to the truth. They’ve grown accustomed to scripting the news in order to control and brainwash the populace. The people have now awakened thanks to alternative media sources available on the Internet. The elite can’t stand the fact that an outsider, a populist, was elected president and have now revealed themselves for what they are—purveyors of fake news.

This is why Obama and the people he represents are anxious to gain control of Internet news and discourse. They want Chinese style censorship. We must remain vigilant and not let this happen. We need to continue to shine the light on their plans. The mainstream liars are losing readers and viewers because they are liars. They deserve to become extinct.

Europe is Mad over Muhammad: 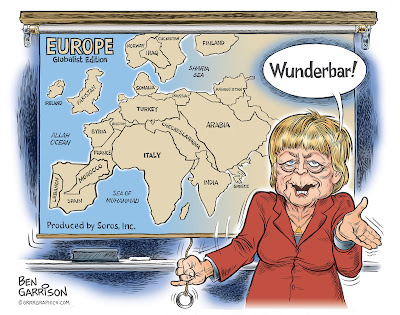 When I graduated from Angelo State University many decades ago, I had a chance to go Italy with many of my fellow art majors. Having excelled in the study of the Italian Renaissance, such a trip greatly appealed to me. Alas, I was poor. At night I worked at a bakery while going to school full time. I had rent and bills to pay and I didn’t have any savings for such a vacation. The head of the fine art department, Dr. Otis Lumpkin, offered me some financial aid. He was a great professor, but I had a new job awaiting me at the local newspaper. It was a chance to work at a desk while doing something I enjoyed—graphic arts--and I didn’t want to put that off. I figured I could always go to Europe later on my own time and dime.

It never happened for various reasons. Now I’m not sure I would like what I see if I do finally make the trip. Will Europe be recognizable if Islam continues to gain power there? “No go” zones continue to expand while those who complain are arrested for ‘hate speech.’ The complainers are labeled ‘Islamophobic,’ ‘xenophobic’ or ‘populists.' Oh no! Populism and nationalism are supposed to be terrible things according to the left. We’re supposed to love everyone and have open borders. We’re all the same, right? Wrong. People and cultures are different. Too much diversity inevitably leads to conflict.
Ostensibly the ‘immigrants’ were brought into Europe to boost the economy and do the work that the citizens wouldn’t do. (Sound familiar?) Instead, they were put on the dole. They got free stuff while out-breeding the locals. They brought their lower IQs and aggressive religion with them. Far too many refuse to assimilate. Why should they? Islam tells them that they are superior. Today, Mohammed is one of the top names for newborn boys. Sharia courts are springing up unopposed. Western civilization is treated with disdain. Women are raped and the police look the other way due to political correctness.
Why are we seeing this self-immolation by the west? Because lefty loons and George Soros want it. They want to tear down western civilization in order to easily usher in globalism to Europe and America. We are beginning to see some push back. The Brexit vote and the election of Trump signaled that citizens have had enough, but there is much more to be done. Soros needs to be arrested. Merkel needs to be thrown out of office. Mass immigration needs to end.
I want the countries in Europe to keep their identities, languages and cultures. I don’t want to visit Turkey in Germany, Somalia in Italy or Syria in France. If I wanted to go to Saudi Arabia, I would. I don’t want to see their oppression when I go to Europe. If we want to help the populace of the third world, fine. But keep them in their own countries while doing it. We don’t need to import them and their problems to the west.
—Ben Garrison
Posted by Ben Garrison at 11:38 PM No comments: