It's Monday. I have a lot of work to do, but the skies are clear and the mountains are beckoning. It's time to go gold hunting! Or fishing or hiking or...instead I'll be drawing complex illustrations using Adobe Illustrator. I'd rather be painting at least! 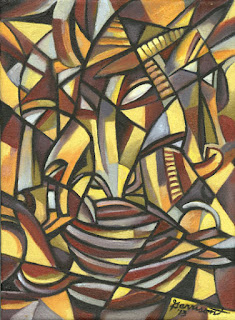 Posted by Ben Garrison at 10:09 AM No comments:

Here I am standing next to one of my paintings at the Art Fusion art gallery in Bigfork. There was an 'art walk' last Saturday and this one was featured on the outside. It looked good in the sunlight. I have a lot of ideas for new paintings and I hope to sell some this summer. I'm also working on a website for my fine art and I hope to have it launched soon! --Ben Garrison 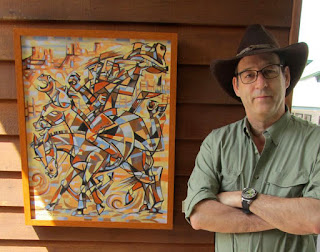 Posted by Ben Garrison at 11:19 AM No comments:

Of course, I do support the 2nd amendment! Posted by Ben Garrison at 12:33 PM No comments:

When I was a kid, I was a big fan of the Dallas Cowboys. My dad was born in Denton Texas and attended a game in the mid 60s shortly after the Cowboys were established. One of my best memories as a kid was when my dad took me and my little brother to Texas Stadium in 1973 to see the Cowboys beat the Rams in the playoffs. My dad could only afford Texas Stadium end zone seats, but they were great--especially since our team scored two TDs in front of us.

Walt Garrison was one of our favorite players and he's a distant relative. He had a mediocre game against the Rams, but that was OK. We got to see him in person...as well as Bob Lilly, Chuck Howley, Lee Roy Jordan....all of our favorite players. Walt was 29 when I saw him play. I was 16. Walt was 6'2" when he graduated from high school and weighed 165. I was 6' 3" and weighed 165 when I graduated from high school. Unfortunately, I had no athletic ability aside from being a fairly good shot at basketball. Walt grew up in Lewisville, about 40 miles south of Denton. Walt's dad was a sharecropper-turned mechanic. My dad grew up poor in a sharecropper family and he became a mechanic, too--after spending 20+ years in the Navy. Ironically, Walt named one of his boys 'Ben,' which is my name and also my dad's name.

My dad gave up cigarettes in the late 60s but then became addicted to Copenhagen, a product produced by the company the Walt Garrison endorsed. It was an awful habit that he could not kick. Right up until he died at the age of 79 he could not give it up. I don't blame Walt, of course. A lot of those Texas country boys grew up with such tobacco. It was a matter of course.

The point of this mini-essay? No point. I happened to come across Walt's autobiography and I just finished it. He was a talented athlete, but also had a lot of luck. Mostly, it underlined the fact that time is going by quickly. The bird of time has but a little way to fly and it is on the wing.
Posted by Ben Garrison at 10:22 PM No comments:

While I'm at it, I thought I'd publish my latest 'End the Fed' cartoon. 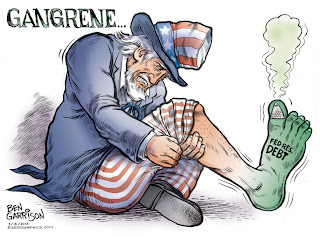 Posted by Ben Garrison at 10:59 AM No comments:

It has been a long time since I've posted. Fortunately I have had a LOT of work lately and little time to blog or draw cartoons or play my viola. I have also not had time to work on my paintings, but I have plenty of ideas, paint and canvas awaiting me.

More posts to come once I finish up some commercial art projects. Meanwhile, here is a famous ballad played by my favorite Chopin interpreter.

Chopin Ballad in G Minor
Posted by Ben Garrison at 10:34 AM No comments: