"National Review" and "The Death of Editorial Cartooning"

'National Review' mentioned me in an article written by a Canadian man with his nose far, far up in the air (and probably in other places). No wonder this know it all, neocon, 'never-Trump' echo chamber has lost credibility. The NR itself is in decline--not just editorial cartooning, you toffee-nosed Brahmin bullshitters!
https://www.nationalreview.com/…/editorial-cartooning-decl…/
Oh--forgot to add where they mention me. I'm 'childish.' Well, OK..it's good for an old man to hear that.
"Way on the other end, there is Ben Garrison, the favored cartoonist of the Trump-era Right. Garrison is a talented artist with firm allegiance to the traditional norms of editorial cartooning, yet his work is so childishly partisan that it’s painful to consume in large doses. The man is a living example of Poe’s Law — which states that earnestness is often indistinguishable from mean-spirited parody. A typical Garrison cartoon depicts our lumpy president as a lantern-jawed he-man fighting various embodiments of the Left and stock villains of the crackpot Right (Illuminati, Rothschilds, chemtrails, etc.). This too serves no purpose beyond propaganda."
"OUR" lumpy president? JJ, you are CANADIAN. Stick with drawing pro-Trudeau cartoons. You've stated, "Editorial cartooning now appears to be something of a dead art so lately I’ve been trying to move on to other things." It's a dead art for you because you're no good! Because your cartoons are DOA doesn't mean the entire genre is dying.

I have drawn cartoons that sharply criticize the president for his strikes on Syria as well as his stand on torture, which is abhorrent, but NR has its mind made up. Too bad for them that fewer are listening them--and to the rest of the legacy media.
Notice how outfits like the NR like to shill for the establishment. The Deep State does not exist for them because they are one of its mouthpieces. The CIA, FBI, CFR, the Bilderbergs, the military industrial complex, central bankers and so forth--all are good guys to NR and if you question it you're called a conspiracy nut. There are corrupt villains in the Deep State--they are not 'stock.'
To the cartoonist and author of this junk J.J. McCoullough: Yes, I do indeed draw Trump in a positive manner to balance out all the cartoonists who have Trump Derangement Syndrome. Trump may be our last, best hope to drain the swamp that you support.
You are CNN's cartoonist! Here's a childish cartoon you drew showing Trump with small hands, squinty eyes, tan lines, etc etc. The usual approach from anti-Trumpers. You drew the corrupt hag Hillary in a positive light. Your cartoons are ham-handed and flat. Death of editorial cartooning? Yes, and hacks such as you are definitely a part of that trend. 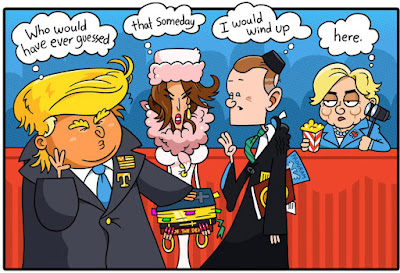 Posted by Ben Garrison at 10:17 AM No comments:

At Aretha Franklin’s funeral, there was a young female singer standing in front of Bill Clinton. Was it any surprise that he stared at her derriere? The rapist and serial sexual assaulter can’t help it. It’s his defining characteristic. He made 26 flights aboard the “Lolita Express” flights to Epstein’s “Orgy Island.” Those vacations weren’t spent staring at palm trees.
McCain’s funeral became politicized with veiled anti-Trump sentiments expressed. The left now considers McCain to be a saint because he hated our president. The question now is what are Democrats going to do to stop Trump? They probably won’t win seats in the mid term needed for impeachment. They'll have to wait until 2020 to unseat him. Who can possibly do that? An ancient and raving communist? Pocahontas Warren? A whack job such as “America was never great” Cuomo? Oprah? No. I predict it will be Hillary once again. 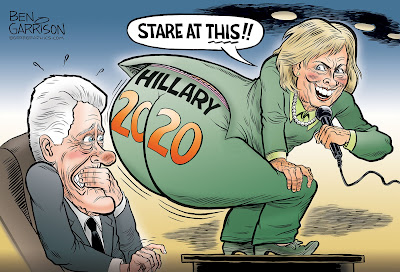 Hillary’s whole life has been about her becoming president. Despite a long history of crime, lies, corruption, and two failed runs at the position, she will try, try again. She’s like a shark who must keep moving to survive. Hillary must keep moving toward the presidency for her life to have any meaning or purpose. Besides, the Clintons still control the Democrat Party. Their personal worth is around $50 million and the Clinton Foundation has $2 billion accumulated. Pay for play politics certainly did pay off for them. She still has the Deep State and its propaganda media at her disposal along with her willing central banker and globalist backers. Millions of illegal aliens will vote for her. The dead will rise from graves to vote for her.
There are three things that can stop her:
1. Her failing health could deteriorate to a point where it becomes impossible. She can no longer walk up a few stairs without help, but as long as she can be carted in and get in a few words between coughing fits, she’s game.
2. Trump’s success as president and his increasing popularity will be tough for her to overcome. Everyone knows she’s unlikeable. Few wanted to hear her speak during her last run. Less will be interested on the next go ‘round. If she does make another go of it, Trump will beat her even more soundly.
3. The best way for her to be stopped is this: Trump fires Sessions and gets an Attorney General capable of prosecuting her for her numerous crimes. Her server contained classified emails sent directly to the Chinese. She obstructed justice by destroying evidence. She paid for a fake dossier used by her allies in the FBI to go after Trump. The president can end Hillary’s aspiration by making her face justice. LOCK HER UP!
—Ben Garrison
Posted by Ben Garrison at 11:56 AM No comments: 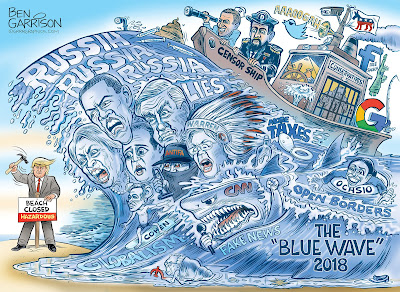 The Democrats are riding a cresting wave of corruption, lies, censorship, and desperation. They hope to win the mid terms and then negate Trump’s accomplishments. I predict it will be a crashing failure. They’re losing the narrative. Even many progressives no longer believe the ‘Russian Collusion’ bunk that was illegally drummed up by Hillary and Obama along with the politicized FBI. The president needs to make everything public so everyone will know for sure that the Deep State has weaponized the justice system to fire in their favor. Heads should roll. More people should be fired. Starting with perhaps Jefferson Sessions.
The blue wave will dissipate quickly after crashing on the beach of truth.—Ben Garrison
Posted by Ben Garrison at 10:42 AM No comments: