Article in the Kalispell paper

It was flattering to see myself written up in the local Sunday paper. Full color, even. The reporter did a great job telling my story and I got a kick out of seeing my cartoons published on real newsprint! My 86 year-old mom is a subscriber and she has since pronounced me 'famous.'

A big thank you to Amanda Lanier for her terrific writing!

Ben
Posted by Ben Garrison at 12:17 PM No comments:

The Crooked House of Clinton

Here's my latest cartoon showing how Trump will demolish the corrupt house that the Clintons built. 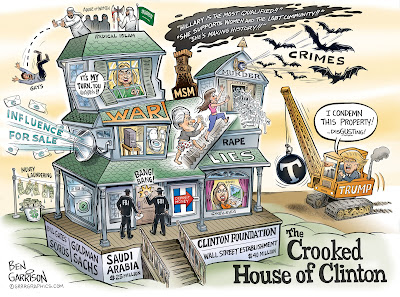 Posted by Ben Garrison at 7:21 PM No comments:

Brexit and 'The Guardian'

Today the Guardian published a hit piece on me--suggesting I'm a 'Nazi' and 'anti-Semitic.' Ho hum....I've heard that for years and it remains nonsense. There is nothing anti-Semitic about this cartoon. There is a MUSLIM flag above the EU flag representing the influx of people who do not want to assimilate into western culture. It's not the Star of David.

The rape of people in Europe and particularly in Sweden by Muslims is a very real and a big problem. Oh--but nobody can even mention that because they might instantly be labeled 'racist' and 'nazi.' Political correctness must always rule reality! People need to stop fearing the dreaded 'racist' word and speak out--stop letting the commissars of political correctness decide whose speech is valid and whose isn't.

Meanwhile, here's the cartoon again--translated into German thanks to a friend in Germany who helped with the translation. 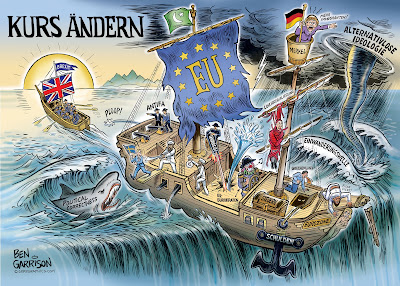 Comment
Your latest cartoon is beyond racist, how do you think you can get away pumping out racial hatred as if you're Joseph Goebbels? We live in a modern multicultural world where political correctness isn't something to be sneered at or anthropomorphise as a shark, political correctness is simply the pursuit of equality for everyone. If you do not wish to live in a society that promotes these values you are more than welcome to leave. Portraying Muslims as pirates because of the actions of a tiny fraction of Islam, depicting Angela Merkel as some kind of tyrant,and mocking Sweden, all of which simply racist beyond belief. I can assure you I speak for all the reasonable human beings in the world when I say, people like you are the problem in this world.Not Muslims. Not the EU. Just small minded ignorant dinosaurs such as yourself. If you so wish to justify your cartoon, which is clearly intended to incite racial hatred, it would be much appreciated. However feel free not to reply, you've clearly shown your true colours in your repulsive work.

Posted by Ben Garrison at 11:41 AM No comments:

It's past time the EU breaks up. It's time to end these vile institutions that are designed to enslave humanity. End the UN. End the IMF/Federal Reserve central banking oligarchy. And while we're at it, round up all the Bilderberg attendees and put them all in prison.

Here's a good message I came across last night that aligns with my views:

Millions of Taxpayers worked for a lifetime, earning and saving for retirement, only to have it stolen in 2008 by criminals on Wall Street. This money was not lost or destroyed. It was stolen. By deception, lies of omission, and outright lies, illegal collusion, insider trading pump & dumps, and 101 other means not yet revealed, the life savings of millions of Taxpayers was stolen. These are not baseless accusations. The testimony of Alayne Fleischmann is sufficient to convict JP Morgan of criminal behavior that was commonly practiced by its peers. Overall, trillions of Dollars were stolen from millions of Taxpayers.

The injured parties demand full restitution, since this savings is their sole means of survival. Given the unreasonable disparity in wealth between those who control and directed the criminal actions, versus the victims, restitution is justified. The amount owed is due to the extent of the fraud.

Due to the fraud described above, each Taxpayer is owed at least one million Dollars. Social Security is an appropriate mechanism by which to return the stolen wealth.

Do what Iceland did. Repudiate the debt they create out of thin air. Kick the banker-aligned politicians out. Kick the bankers out or put them in prison. End their sick and immoral system of money. Make them pay back hard working Americans. They have been stealing from us for over 100 years now. Time for pay back! Stop importing millions of people who do not want to assimilate into western culture--a culture of freedom worth preserving.

Maybe Brexit will be the start of this trend! 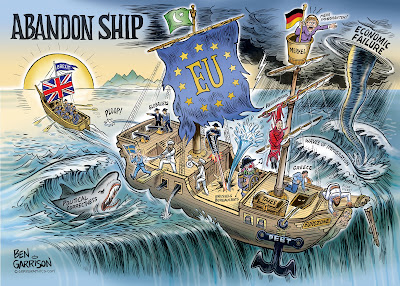 Posted by Ben Garrison at 9:33 AM No comments:

An Open Letter to Jeffrey Goldberg

UPDATE: Goldberg has since amended his column to mention that it's a cartoon altered by trolls, but the libelous cartoon remains and he suggests Trump will initiate a new holocaust if elected. That's completely silly.

I was recently libeled in 'The Atlantic.' The reporter, Jeffrey Goldberg, published a cartoon that had been defaced by trolls without any explanation--my name was on it and he apparently considered it to be my real work. It wasn't. Here is my letter to him:

You are an award-winning journalist with a legitimate beef. I get that. I know what it’s like to get hate mail day after day—I’ve received it for years.

But when you posted that vandalized, trolled-cartoon with my name on it, you committed libel. Before you attack a Trump supporter as a some kind of Nazi anti-Semitic nut job, perhaps a modicum of research is in order, no? Isn’t that basic, ethical journalism? I know that cartoon aligned with the narrative you were trying to convey, but did you even search my name to find out that I’m the most trolled cartoonist in the world?
Here is my real cartoon. I drew it for Halloween, and the corrupt establishment for both parties is represented by Dracula:
https://grrrgraphics.wordpress.com/2015/11/01/trump-van-helsing-pulling-back-the-establishment-curtain/
Anonymous trolls stole the cartoon and changed it into anti-Semitism. They pasted the anti-Semitic meme face onto it. That was originally drawn by Nick Bougas, who went under the pen name of ‘A Wyatt Mann.' I never grant permission to anyone to deface my cartoons. What they did constituted copyright infringement and libel. You compounded their libel by giving it a larger arena in the The Atlantic.
Yes, I support Trump. No, I’m not a Nazi and in fact I’ve spoken out against anti-Semitic hatred many, many times. I published a book disavowing the racism and anti-Semitism the trolls tried to assign to me. The trolls weren’t only from the far right, either. Some are social justice warriors from the far left who are determined to ruin my reputation and make sure I don’t get work.
You need to publish a retraction.
Ben Garrison

Last year, a kid with a similar name, Joshua Goldberg, was arrested by the FBI for sending out bomb instructions to what he thought was an ISIS terrorist. That Goldberg created created libelous hate screed boxes (using my name and face) that called for the murder of Jews. He would then spread the libel around the Internet using the handle "European88." That was bad enough and it caused me a lot of grief, but now the trolling has moved 'mainstream.' Anti-Trump reporters are libeling me as a "Nazi" simply because I drew some pro-Trump cartoons. Shame on them.
Posted by Ben Garrison at 9:04 AM No comments:

Note to a Bernie Supporter

I get a lot of email--some of it is positive and encouraging. Some of it is negative and filled with name calling. The ones who call me names often use email that is anonymous or otherwise won't allow me to reply. That's too bad, because I would like to have the opportunity to retort. Especially when I get email from critics such as this fellow--a certain Craig Jamison. These people are usually Social Justice Warriors (SJWs) who like to play 'hit and run.' Only they are allowed to debate--everyone else must shut up. Well, I'm not going to shut up, so instead I will allow everyone to see what he wrote:

Comment
To: Ben Garrison
Your cartoon depicting Bernie Sanders selling GMO Wheat is precisely the opposite of his policy: he supports GMO labeling. Labeling him a communist is also a sign of your ignorance. We Americans enjoy our humor in comic strips, but do your homework before launching a tirade against someone -- lest you come off like a clueless ass.

1. Bernie supports GMO labeling. He's against Monsanto and that's good, but mostly because they're a huge corporation pushing out the small farmer...not because he's necessarily against GMOs. He has stated he doesn't believe it causes health problems, so how is the cartoon inaccurate? He wants states to be allowed to label it and there it is in my cartoon--labeled! So you're wrong about that.

2. As for him being a communist, it's a matter of nomenclature. The word 'communist' isn't as cool these days so he calls himself a 'socialist' instead. Anyone can google search him and see the facts.

3. It's not a comic strip. It's a political cartoon and as such doesn't necessarily have to be funny. Such cartoons are designed to provoke and make people think. The cartoon was successful because it made you angry enough to write me and call me names.

Bernie is one of the few (along with Ron Paul) who stood up and questioned the central bankers and the Federal Reserve and I admire him for that, but his road to socialism will lead to disaster--just like it always does. (J'ever hear what happened in Venezuela?)

Next time please do your homework before you call someone names. 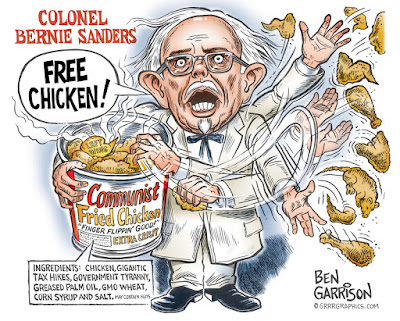 Posted by Ben Garrison at 9:09 AM No comments: 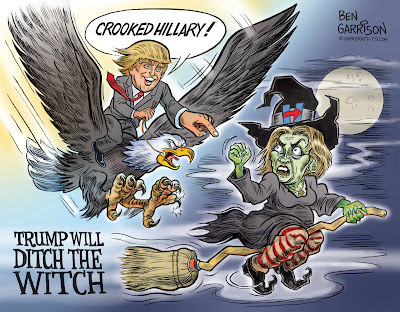 Why the witch must be ditched:

Turn in your guns!
GMO food is good for you!
Pay more taxes!
Drones protect our freedom!
Click it or ticket!
Carbon taxes!
It's for your safety!
Fluoride helps your teeth!
Don't forget to take your Prozac!
More war! Because they hate us for our freedom!
There are no false flags!
Building 7 collapsed due to fire!
What difference does it make?
Obey the TSA!
Radiation is good for you!
Would I lie to you?
Your breathing causes global warming!
Bail out the banks!
Go to your Fema camp!
Keynesianism is right!
Learn to obey in public school!
Pay more fees and fines!
Aspartame is safe!
You look suspicious. I will do a body cavity search!
Have you been drinking tonight?
I'm recording everything you say and write!
Obey or you're a racist fringe group!

If you libertarians had your way, there will be chaos and criminals running things!...wait a minute.
Posted by Ben Garrison at 5:13 PM No comments: