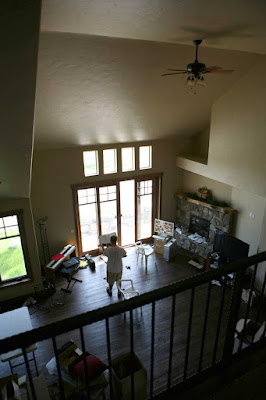 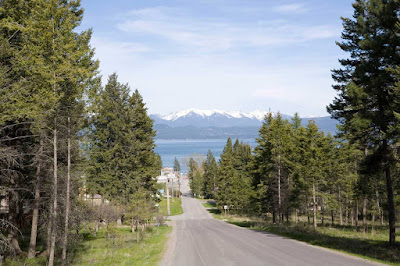 It has been a long time since I've blogged and a lot has changed. I'm now living in 'big sky' country and that description is accurate. The skies are bigger and the views are magnificent and inspiring. Everywhere I look I see landscapes to paint. Moving, of course, has been a gigantic headache. I've learned it's better to jettison as much as possible and buy new later. It's too expensive to haul things like heavy desks, ladders and so forth.

Here's a photo of the road to the peaceful town of Lakeside. I've already walked up and down it several times. Also shown is my son playing in the living room. It sounds like the Hollywood Bowl! The acoustics are great due to the high ceilings. I even sound fairly competent on the viola. It is a lot more fun to play when sound is resonant.

I need to get going and do some unpacking. I'll write more later.
Posted by Ben Garrison at 9:40 AM