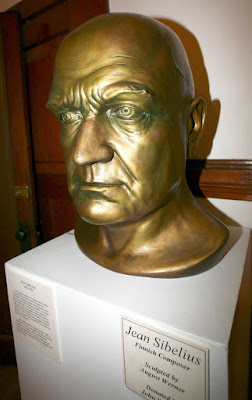 I usually go through phases and listen to certain composers over and over before moving onto a different one. With Sibelius I can't stop listening. If I had been born a great composer, I would have written music like his. Today I listened to his very short 7th symphony a half dozen times while working on a project. I've heard plenty of profoundly beautiful music in my life, and the finale of his 7th is right there at the top. The music climbs the highest summit and then keeps on going up from there. One critic said the music defies gravity and he's right. It's amazing stuff and a tonic to the soul. Shown here is a photo I took of an impressive bronze bust of Sibelius at the Nordic Heritage Museum last year.

As for my feeble viola playing, it's an ongoing struggle. One that I enjoy. Today I decided to change my 'A' string. I have been unable to get a good sound on it when playing quietly. I replaced the string and it sounds better, but unfortunately I can't get the single tuner on that sting reinstalled correctly. A simple thing that produces complete bafflement.

I bought a beginner book on positions. The 3rd position is the next logical step in my musical journey. I don't feel I'm ready for that yet and I keep putting it off. I spent most of December playing Christmas music including some older works that sounded monastic. I loved it. My son was home from college and we played many duets and his girlfriend came over a few times (she also plays violin) and we played several trios including a piece from Handel's Messaiah. It was great and so much fun when I played it all correctly. The few people who heard me play last year commented that they've noticed a great improvement, and I was happy to hear that. (Thanks, mom!) I used to be petrified to play in front of audiences--even one person--but with practice my confidence and powers of concentration have greatly improved.

Meanwhile, I just put together a little course on info graphics--in particular charts--for the company I work for. I used to know all that stuff like the back of my hand when I worked for newspapers. I was surprised at how rusty my brain had become with all the rules and SND jargon. It all came back to me, though. I put together several sample charts for the presentation and that was a lot of fun too. I may post some on my next visit to blog land.

On a side note, it's my son's 19th birthday today. His last year of being a teenager. He's doing well at RMC at Billings, Montana. Right now he's enjoying temperatures near 0°. Happy birthday, Ian!
Posted by Ben Garrison at 12:26 AM No comments: