While working I find an odd textural rhythm going through my brain. It's the background string section of Tchaikovsky's "Voyevode." I am fascinated by this work to the point where I bought the score. I could not make heads or tails of it. It was way too complex for me. But my violinist son could sight read the violin section and play it without ever having heard it.

Below is an interesting tidbit found in one of my internet searches. It explained a lot about what could have been going through the composer's mind.

Rather confusingly, Tchaikovsky wrote two works called Voyevode. The first Voyevode was his first opera, written in 1868 when he was 28. It was not a success and he abandoned it. Only the overture still survives as his Op.3. More than 20 years later, he came across a ballad by Pushkin with the same name, and decided to write a short tone poem based on it. He composed it in 1890, at a time of crisis. His patron and supporter, the Countess Nadezhda von Meck, who had supported him emotionally and financially for 13 years with a stream of correspondence, commissions and money, withdrew her support. Tchaikovsky was devastated and bitter, and never really recovered from the blow.

The story of Voyevode is simple and harsh. A Provincial Governor (we might call him a Sheriff, the Russian word is a Voyevode) returns home to find his wife in the garden with her lover. Giving his servant a gun and ordering him to shoot his wife, the servant shoots the Voyevode instead. Pushkin’s ballad is ironic, dry and unemotional, but Tchaikovsky’s version is full of intense emotion. Perhaps the story of a man deceived and abandoned by a woman, and his unexpected death, carried a resonance for him in feeling abandoned by Nadezhda von Meck? Whatever the truth, within three years Tchaikovsky himself was dead, in unexpected and (still to this day) unexplained circumstances.

The first performance was conducted by the composer in 1891 and was quite successful, but Tchaikovsky decided the piece was no good, and after the concert he tore up the score, and would have destroyed the orchestra parts too had the librarian not gathered them up and refused to hand them over to the angry composer. As a result the work was only published in 1897, four years after Tchaikovsky’s death, from the preserved orchestral parts from that first performance. (It has been suggested that maybe one of the percussion parts went missing after that first performance, because the percussion scoring now is surprisingly thin – only timpani and side drum, where one would expect at least cymbals and triangle too).

The work is in three sections – the two outer sections representing the urgent stormy tensions between the Voyevode and his wife, and the central section being the love affair between the wife and her lover. The final section concludes with the fatal shot, and a dark sombre ending that looks forward to the darkness of the 6th symphony.

----
I have several recordings but I recommend the recording by the Frankfurt Radio Symphony's version with Eliahu Inbal conducting. It's an amazing performance--the best I've heard. Here's the review I wrote for Amazon.com before I knew about the Pushkin story that inspired the work:

Listen to this masterpiece and you may be reminded of a Russian winter. At midnight. Spring is so very far away that it seems an impossible hope. But there is a brief respite from the frozen winds on this moonless night: A small fire inside a Russian peasant dwelling provides some feeble warmth. Unlike his other tone poems, there is no love theme here, but it is still splendid and flows like a shot of vodka. Then suddenly SLAM--the door is shut. We are once again lost in the numbing brutality of the Siberian winter. The ending is similar to the 6th symphony only this time it is even less gentle and sympathetic. There is no heartbeat or the slightest speck of hope. Just a Stalin-like cruel ending. Tchaikovsky tore up the score and called it 'rubbish.' This is very curious and indicates the distressed state of mind he was in before he drank the cholera-laden water. Fortunately they reconstructed the work from the remaining orchestral parts.
Posted by Ben Garrison at 11:08 PM 2 comments: 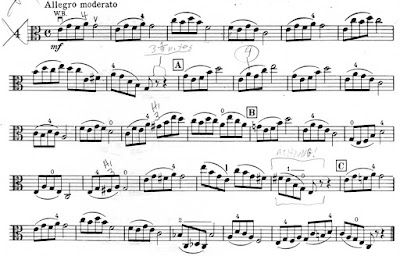 My teacher gave me a passing grade on the study shown here. I played it so many times that I found I had the work playing in my mind over and over too. I can't say I'm able to play it perfectly even now, but I did come close a few times.

I think I'm over the 'wall' that deters many beginners from continuing to play a musical instrument. There is still plenty of frustration, but I now look forward to practicing and practicing longer (when I have the time) and I know am making progress despite inevitable plateaus.
Posted by Ben Garrison at 12:07 PM No comments: