1. He supports the Constitution.
2. He has never voted for a tax increase.
3. He is against The National I.D. or Real I.D. Act.
4. He supports the rights of private property owners.
5. He wants us out of the U.N.
6. He is for 2nd amendment rights
7. He wants to shrink the federal government, not expand it.
8. He does not belong to the CFR (Council On Foreign Relations).
9. He wants to end the I.R.S..
10. He wants to cut government spending.
11. He is against eminent domain.
12. He is against the NAFTA Superhighway.
13. He is against the North American Union Or SPP (It Exists Google It).
14. He is for the principle of sound money.
15. He is against the idea of the Amero (Google It).
16. He is philosophically opposed to big government.
17. He voted against the misnamed Patriot Act that stripped us of our Rights.
18. He is for the Bill Of Rights.
19. He will not forcibly implant us or our troops with microchips or
like devices
20. He has delivered over 4,000 babies and values life.
21. As a doctor, he is informed on the health care issue.
22. He favors guarding our country over policing the world.
23. He has never voted for an unbalanced budget.
24. He has never voted for a federal restriction on gun ownership.
25. He has never voted to raise congressional pay.
26. He has never taken a government-paid junket.
27. He has never voted to increase the power of the executive branch.
28. He voted against regulating the Internet.
29. He does not participate in the lucrative congressional pension program.
30. He returns a portion of his annual congressional office budget to
the U.S. treasury every year.
31. He is against a mandatory draft.
32. He understands inflation is not just the prices going up, but rather the value of money going down.
33. He’s a Vietnam Vet
34. For the first time in a long time, you will not be voting "for the least worst".
35. You will help undo the damage done to our country over the last several decades.
36. He is our last hope for a free nation.


If You Care For America Vote Dr. Ron Paul
Posted by Ben Garrison at 11:43 PM No comments:

From Sheep to Sweater 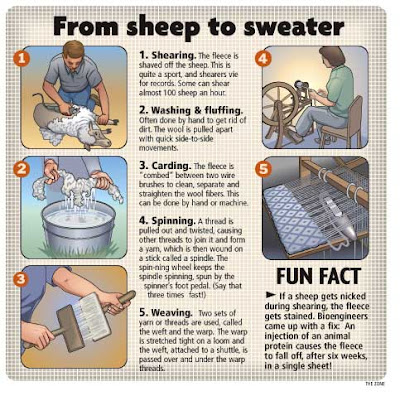 I got word that the Zone pages will indeed start up again this fall. I am currently working on the September pages. I came across this little graphic that I did last year for the Puyallup Fair. I am putting it here just for grins. (click to enlarge).

On a happy note, by prized blueberry bush is putting out a bowl-full of tasty ripe berries every day. I like this time of year!
Posted by Ben Garrison at 3:43 PM No comments: