Why the Stock Market Doesn't Crash 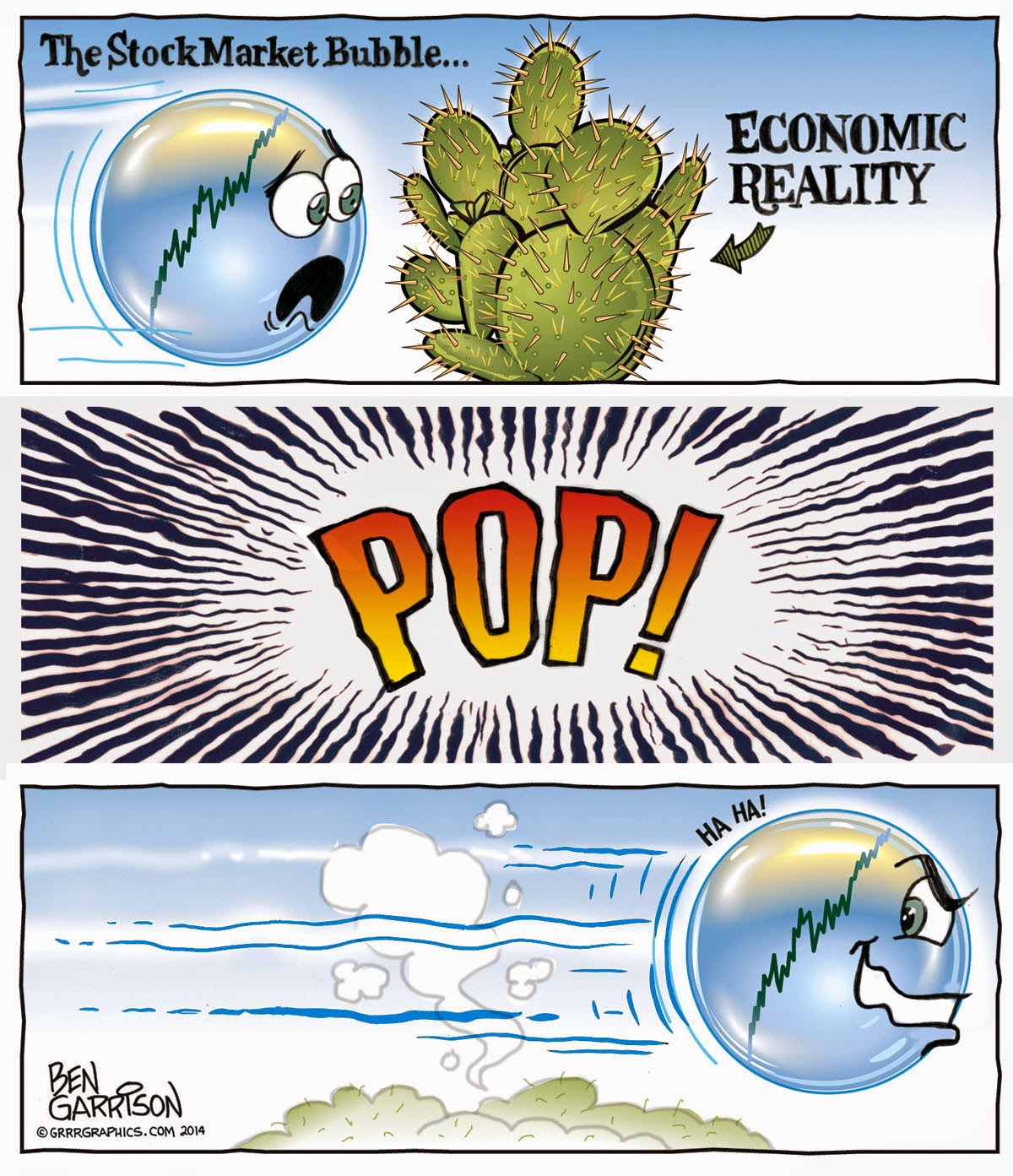 Why doesn't the stock market crash? The short answer: There is no longer a free market in America.
Every pullback is met with shouts of 'buy!' on CNBC and back up it goes. The market goes up despite the threat of war, a possible epidemic and lackluster performances of major companies (Netflix and Amazon are recent examples). It goes up despite high unemployment, lack of buying by consumers and abysmal housing starts. If an asteroid hits the Earth, would the market then collapse? Probably not.

Everyone knows why. It's not a big secret. The Federal Reserve keeps things propped up with endless quantitative easing. They may claim they are 'tapering,' but that's just a token. The Fed may talk about raising interest rates 'down the road,' but they are posturing. They cannot raise rates. The debt has become so massive that it almost transcends imagination. The debt level is nearing $18 trillion, with unfunded liabilities are $127 trillion (Source: Forbes).

Roughly every taxpayer owes over a million bucks. Raising interest rates would make the debt, which has already gone past the point where it could ever be paid off, unmanageable. Taxes would have to be raised drastically. The middle class and small businesses would, as usual, bear the brunt of that. Many global corporations pay zero in taxes thanks to our thoroughly corrupt system. Small businesses take the brunt. Raising taxes even further would bankrupt many. Many would be pushed to the edge into outright revolt. Maybe we should be revolting already, considering how crooked the IRS has become.

Ending the easy money and raising rates would crash the market. That would hurt those who own most of the stock market--the top 1 percent. After all, most Americans own little or no stocks. The middle class is going away and the poor are forced to accept food stamps in record numbers. Most people can't afford stocks--especially at bubble prices. The mainstream media are saying the unemployment figures are low and the economy is humming along just fine and dandy. Try telling that to a jobless college graduate burdened with enormous debt. The job figures are cooked by government propaganda ministries. Real unemployment is over 20 percent. Housing starts remain stagnant. Industries have been sent to slave labor overseas. Real wages are stagnant while the cost of food has risen. Too many Americans live paycheck to paycheck and are burdened with credit card debt.

Meanwhile, the stock market keeps rising, so the media are barking 'all is well!' All IS well for those at the very top. Especially for the 1/10th of the 1 percent. Those that control the printing press make sure the money keeps getting printed and flowing into their coffers. That money doesn't go to the middle class or small businesses. OH NO! It goes to the global banks and corporations who own and control everything and everyone--including Congress. It goes into the stock market and to the companies they own. They are doing quite well and probably hope that most of us 'useless eaters' just go ahead and die so they can enjoy their fantastic paradise of wealth in peace.

When will it end? It will end when the dollar loses its world supremacy. When King Dollar gets dethroned, then we might see some serious crashing. That's why there's endless war. Nobody is allowed to leave the buck umbrella. Certainly not Saddam. Not Gaddafi. Not even Russia.

It's time to end the Fed. It's time to end the sick plutocracy that allows a few at the top to get fabulously richer while most Americans get poorer. If we counterfeit, we get sent to prison. Those who own the printing press can do it at will and without accountability. Those at the very top definitely will not give up their private printing press without a fight. The Congress won't end the Fed. After all, both parties are largely the same and owned by the Fed. They're not on the side of the people. They're on the side of the central banks that own the Fed.

That's why we need a third party--the Libertarian Party.

Trolls continue to ramp up their attacks on me. The troll who calls himself 'Butt nut' is so despicable and low that he has attacked my wife and even my son. He wants to destroy my business. He has stamped my name onto a vile anti-Muhammed cartoon and expressed hope that I could get murdered. Yes, he even wants me murdered. Why? Because he is a far-left Obama fanatic and he doesn't like my libertarian cartoons. He gets on /pol and pretends he's a Nazi in order to encourage Nazis there to pile on and attack me. He is very arrogant and he will never stop attacking me. He's made me his hobby. (Aside from growing tiny fruit trees. He also has a giant fruit blossom tattooed on his chest).

Let me say this again as clearly as I can: I don’t hate Jews. I don’t hate Muslims. I don’t attack people based on their skin color, religion, country of origin or their sexual preference. I’ve never drawn a racist or anti-Semitic cartoon in my life.

When my cartoons began getting defaced with words such as "Zog" and "Goyim" starting back in 2009, I didn't even know what those words meant. One thing I do know: I never received hate mail from Jews. The Jews I have met have been fine, caring people and they're the only ones who have tried to help me remove libel on Face Book—and they did that even though I know that few of them agree with my politics. They have helped me and they have done it for free.

If you see a racist or anti-Semitic cartoon with my name stamped onto it, bear in mind that Ben Garrison did not draw it.

Ben Garrison is a libertarian who believes in free speech. He also favors smaller government and adherence to the Constitution. While hate speech is legal in America, copyright infringement and libel are not. Those things are against the law. People have to make a living and when they are impersonated, defamed and libeled, their name and online reputations are sullied, which makes it more difficult for them to find work.

Hate speech is not permitted on social media--Facebook in particular. There are stated community standards. It's not a violation of 'free speech' when pages calling for the murder of human beings get removed. Trolls do not own Facebook. Nazis are perfectly free to set up their own hate sites and pay for their own servers. Those who do usually have a hat in hand--begging donors for 'support.' To get support, they need attention. That's why they stir up trouble and attack people for no reason. They are children stamping their feet so folks will notice them. The trolls gain some sort of sick, sadistic satisfaction from doing this, but most likely they simply want more traffic on their boring web sites. They want to profit from their hate. Hate is a commodity to them. They want to harvest the haters.

Libertarians are not anarchists, and so it should come as no surprise when a libertarian disagrees with the 'anything-goes-including-vicious-libel' trolls. Libertarians respect property--including intellectual property that is copyrighted. Hate-spewing trolls seem to believe that free speech means they can destroy whomever they wish by posting their 'memes' of libel. They claim a copyright is meaningless. There is no such thing as ownership. They think they are free to edit and deface someone's writing or artwork and then publish it on their site while asking for donations.

Their bullying and defamation is used for entertainment and they want to get paid for doing it. It's done with malice. How do I know? I've received hate mail asking me if my business is suffering. They want to ruin my commercial art business. That's malice. Those who say they can do it because I'm a 'public figure' are wrong. I'm hardly a public figure. Very few know who Ben Garrison is. Just ask anyone on the street. Nope. I'm not a public figure. Even if I were, it's no excuse to trash my reputation using obvious malice. Those who do want to find out who the artist Ben Garrison is via internet searches are now forced to wade through all sorts of disgusting rubbish posted by the trolls.

The haters are so blinded by their own hatred that they're incapable of understanding the difference between libertarianism and anarchism. Their 'philosophy' (if it can be called that) consists of anti-semitism, racial slurs and other ad hominem attacks. It's difficult to tell whether they're really serious about their philosophy of hate or if they're merely spewing nonsense in order to gain attention and money. The 'chuckleheads' also do it for the 'lulz.' (Chuckleheads is a word I came up with to describe them).

When someone rightfully tries to remove Nazi troll libel, the chuckleheads get very angry. They are crybabies when it comes to this matter. They scream, "Muh free speech!" -- even though they have no problem with trampling on the free speech of others by posting defamation and libel. They do not respect free speech. If given the power, they'd take it away from others just like Hitler did.

They're weaklings who have probably been hurt and bullied at some time during their lives. They have discovered that they now have the ability to easily bully others on the internet. They quickly spurt crocodile tears when their libelous hate is threatened. 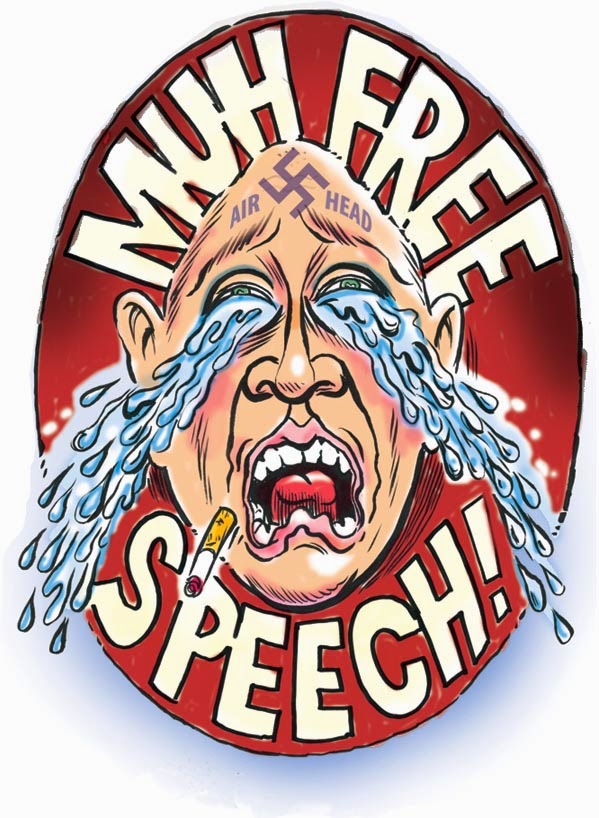 Trolls don't believe in free speech. They overwhelm and shut down reasoned debate and replace it with blind hatred. They believe in hate speech, which is a form of censorship.

Far left socialists and far right Nazis and trolls of all persuasions in between are routinely defacing Ben Garrison's cartoons. They add in offensive racist and Jewish caricatures, usually drawn by an anonymous racist artist going under the pen name of 'A. Wyatt Mann.' These libelous trolls also stamp the copyrighted Ben Garrison signature onto racist images that Ben did not draw.

They also impersonate Ben by stealing his name and photos and incorporate them into hate 'meme' boxes in order to defame him. They've clearly stated they're out to ruin his reputation and his ability to make a living from commercial art. One of the trolls even stated that he'd like to see Ben get murdered. Ben's family has also been attacked.

Ben Garrison is not against Jews, Muslims, African Americans, Hispanics or any other religion or ethnicity. This is a battle of ideas, not skin color, country of origin or religious heritage. Ben Garrison is against racism, bigotry and libel. Ben is against hate speech on social media where community standards are clearly stated. By 'hate speech' I'm referring to those who want to murder people based on their race or religion. Ben is for free speech and those wishing to express their hatred are free to do so on their own sites and using their own names.

Ben Garrison is for freedom and the Constitution. 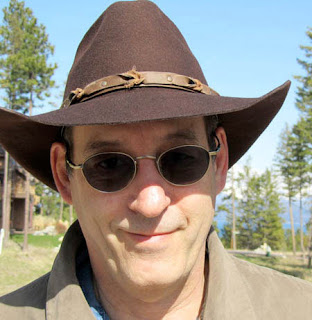 Posted by Ben Garrison at 12:01 PM No comments:

Here's my latest cartoon I drew for the Independent Gazette. It is a honor and privilege to have my work published on real newsprint again!

Ann Coulter is a mouthpiece for the Neocons. She is the attack dog, er, attack horse for the Republicans. She recently joked that she would track down and 'drown' Libertarian voters. Ann is somewhat horse-faced and makes a good cartoon caricature. 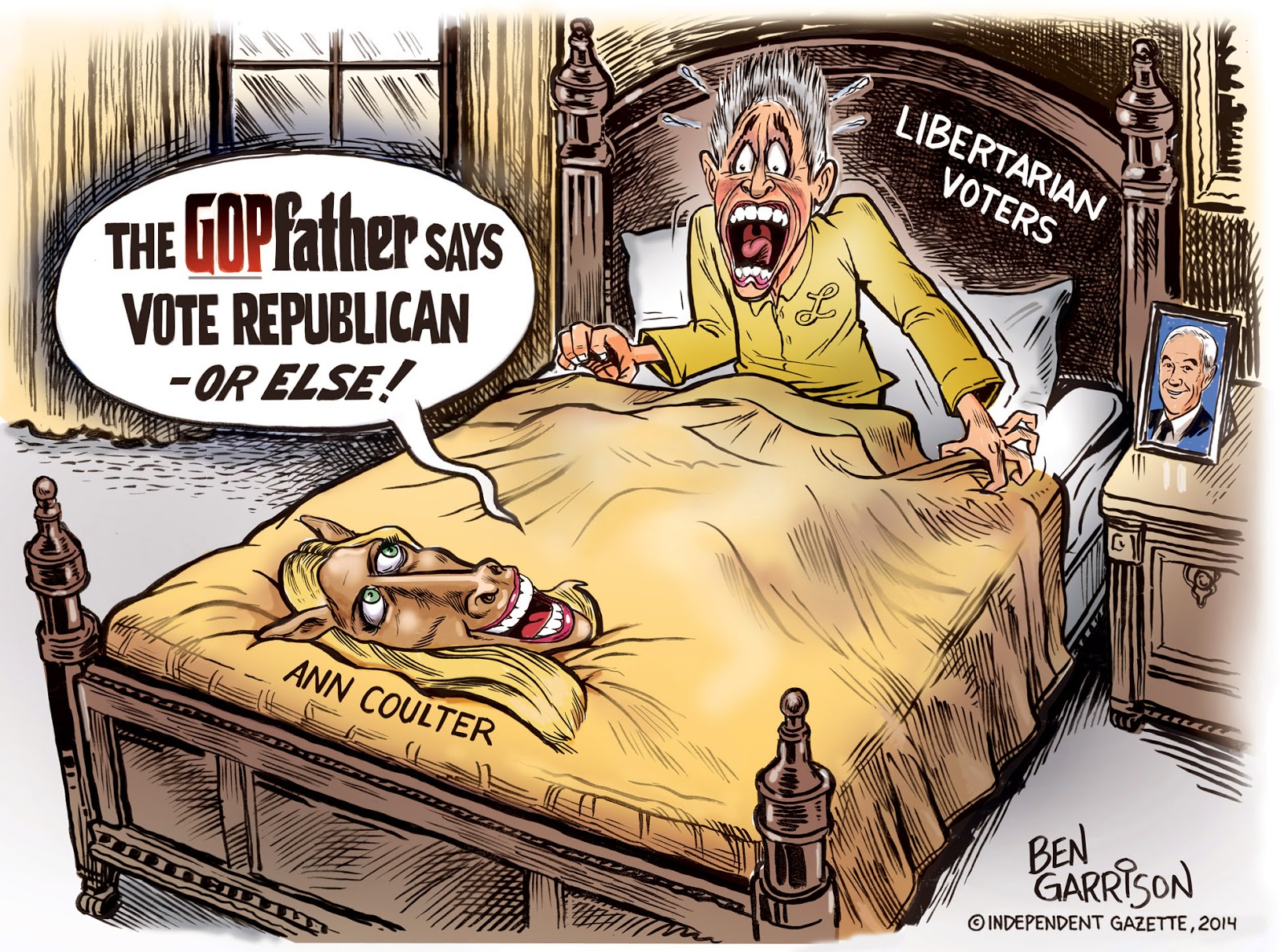 Another cartoon I drew for the Independent Gazette: 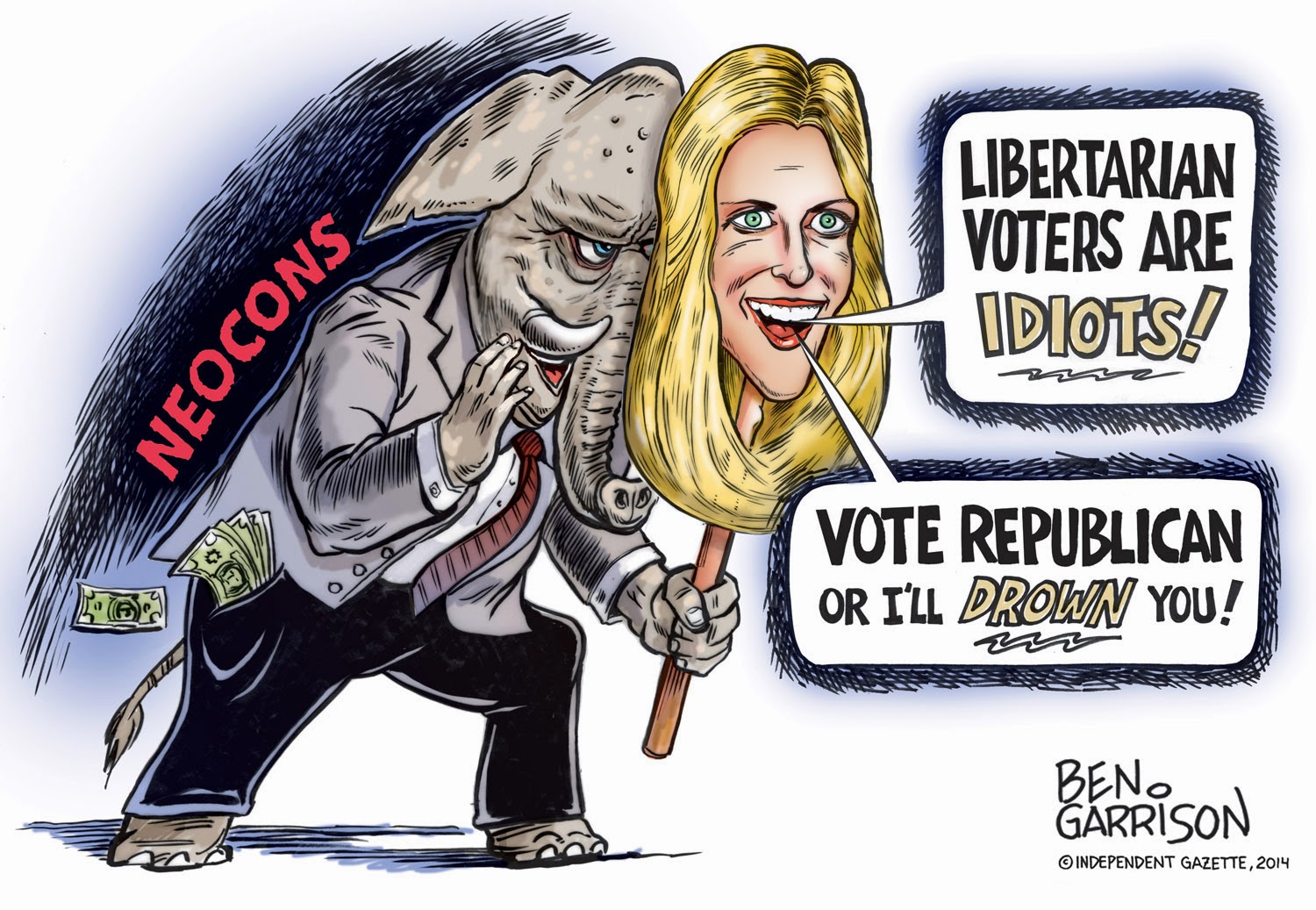 Posted by Ben Garrison at 12:05 PM No comments: