The TSA is a harbinger of a police state. Choose to get a radiation dose and a detailed nude scan or 'opt out' for an embarrassing grope by a TSA thug? No thank you to both. It's bad enough we have to take our shoes off as well as our belts and shuffle along on dirty airport floors trying to hold up our pants as well as our dignity. TSA has declared war on dignity. Americans need to draw a line here. Chertoff, former 'Department of Homeland Security' head made sure the scanners were bought so he could profit handsomely from the sale. It's time to put him in prison. It's time to tell 'Big Sis' Napolitano that's it's not OK to completely strip human dignity from Americans in the name of fear. It's time to stand up for our fourth amendment. 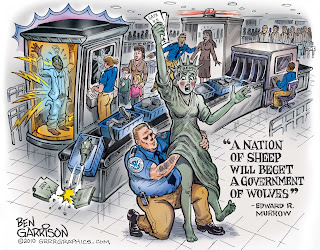 Here's a cartoon I drew today (click to enlarge) that sums up what's happening. I am trying to develop a GrrrGraphics.com site and that's why the tagline is on the cartoon. I hope to have the site ready soon--it looks like it will be done by this weekend sometime.
Posted by Ben Garrison at 9:59 PM No comments: 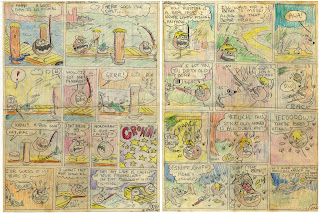 I was going through boxes of old papers the other day and burning them in the backyard fire pit. I happened to come across this original. I hadn't seen it in many years and I didn't know I still had it. It's one of the few remaining drawings from my childhood. I drew these two cartoon strips (one sheet of paper--part one on the front; part two on the back) when I was in the 6th grade. I had just started drawing and I was interested in cartooning. I named these original characters "Bean Boopers" and drew them off and on until high school.

The drawings (click to enlarge) weren't bad for a kid my age. Some probably will think I don't draw much better now. I actually had a sense of humor way back then, too. Still, I'm considering revamping the Bean Boopers. I think they might make a good kids book or Flash animation. Maybe I could sell Bean Booper magnets!
Posted by Ben Garrison at 3:10 PM

The March of Tyranny 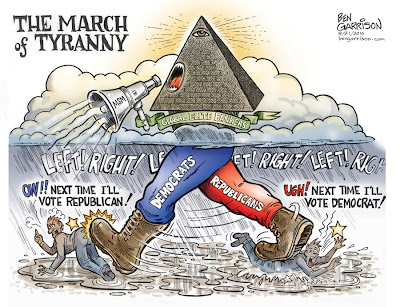 Lately I've been thinking of a book I read long ago in high school: "A Tale of Two Cities" and the French Revolution. It was the best and worst of times. America is sliding into the worst of times, but we can return to the best again if we wake up and realize who is really lording it over us: The global elite banks (Fed central banks, IMF and their owners who control the debt enslavement money). If little Iceland can toss them out, then so can we.

My cartoon (click to enlarge) shows how the banking and corporate masters (crony capitalist fascists) control both major parties behind the scenes. They keep us distracted with left vs. right while giving us the illusion that voting for one of the other parties will solve things. It won't.

A good article I read this morning on the matter:

"...management has achieved a major increase in income and wealth. In 1973, chief executives in the US earned 26 times the median income. Today they earn 300 times. This enormous widening of the gap between the top few percent in society and the masses is morally and socially unacceptable. When the bad times start in earnest, this is likely to lead to major social unrest and violence directed against the privileged."

Until we return to the sound money of the Constitution, gold and silver, this debt slavery serfdom will get worse.


"Repression is the only lasting philosophy. The dark deference of fear and slavery, my friend," observed the Marquis, "will keep the dogs obedient to the whip, as long as this roof," looking up to it, "shuts out the sky."
Posted by Ben Garrison at 9:35 AM 30 comments: 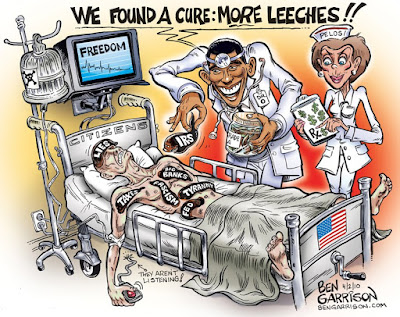 Here's my latest cartoon that illustrates how I feel about health care. (click for larger view). To be sure, Americans deserve health care considering all the money we pour into the system. The trouble is, the government is broke and won't cut spending (the military, for example) to pay for it. Instead, we'll be taxed more. We'll face a new, inefficient bureaucratic labyrinth. We'll have more tyranny foisted upon us through the IRS. Eventually we'll be told what we can and what we cant eat, drink and smoke and so forth. We'll be told when to die. There will be long waits for care. The doctors won't be adequately paid.

This is not freedom and as usual, we're being forced to pay for our own slavery.
Posted by Ben Garrison at 3:11 PM