I was disturbed by Apple CEO Tim Cook's speech as he accepted an award from the ADL for his 'courage' against 'hate.' Here is an excerpt:
--------
Apple CEO Tim Cook this afternoon accepted the Anti-Defamation League's inaugural Courage Against Hate Award at the Never is Now Summit on Anti-Semitism and Hate, where he gave a keynote speech that had a strong message for those seeking to spread hate on Apple's platform.

"We only have one message for those who seek to push hate, division, and violence, Cook said. "You have no place on our platform. You have no home here."

Cook went on to say that this is a longtime view of Apple's, and he pointed out the company's removal of Infowars content earlier this year. Apple, he said, is not afraid to say that its values drive its curation decisions.

From the earliest days of iTunes to Apple Music today, we have always prohibited music with a message of white supremacy. Why? Because it's the right thing to do.

And as we showed this year, we won't give a platform to violent conspiracy theorists on the App Store. Why? Because it's the right thing to do.

Infowars never called for violence. I've personally met Alex Jones and I can assure everyone that he's neither racist nor a 'white supremacist.'

I'm not anti-Semitic and I have Jewish friends who are libertarians. They LIKE Alex Jones and are against the Federal Reserve. It's not anti-Semitic to call out a warning against the ADL who have set themselves up as the arbiter of what's 'free speech' and what's 'hate speech.' I'm on their list because I criticized the Rothschilds in one of my cartoons. WHAT? We're not allowed to criticize the corrupt central banking system without being assigned the 'hate speech' label, which leads to social media bans and maybe even getting banned from Patreon and PayPal? This is a dangerous and slippery slope, folks.

So now 'conspiracy theorists' are lumped in with 'white supremacists' and 'haters' and must be banned from all Silicon Valley platforms. This is how they're going to end up banning all conservatives in order to have a monopoly on what can be said and not said. The power-mad PC lefties will FORCE us to behave and accept their agenda, which includes the silencing of Christians, the forced acceptance of 'climate change' and a carbon tax, the forced relinquishment of our guns and Second Amendment while forcing us into a Chinese-style social credit system. This must be stopped. NOW. Who says the ADL has the exclusive right to determine what is and what is not hate speech? Tim Cook is leading Apple toward the very dystopian society that the first Apple commercial in 1984 warned us about.

I know what real hate speech is--trolls used my name and face and altered cartoons to call for the murder of blacks, gays and the far left. Hate speech was not free speech for me. It was very costly. It cost me my reputation and lost work from my commercial art business. It cost me peace of mind.

At one desperate point to make it stop I said "hate speech is not free speech.' Well, sometimes it isn't.  Hate speech in the form of death threats, defamation, libel, and slander is actionable in a court of law. Andrew Anglin is finding that out when he sent his troll army to target a jewish woman and her family. She slapped a lawsuit on him, and rightfully so.

I could not afford such lawsuits. There was nothing I could do about it except sit and take it. Hate speech to me still meant having my reputation and ability to make a living destroyed due to copyright infringement, slander and libel.  Now, however, 'hate speech' is whatever the ADL says it is.

And that's my tirade for today.--BG
Posted by Ben Garrison at 12:28 PM No comments: 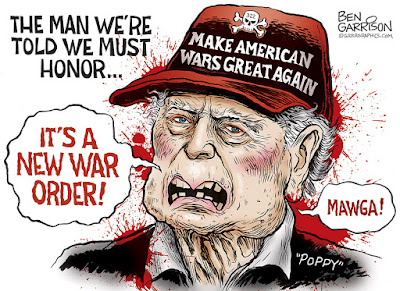 We’re told we must pay tribute to the late George Herbert Walker Bush. We must honor the dead. The CIA-led Deep State and their corporate media tell us so. Like John McCain, conservatives and liberals alike are persuaded to genuflect and give moments of silence to these ‘great heroes.’ Why? If Hitler had just died, would be asked to bow our heads to him out of respect for the dead? Stalin and Mao, too?

What are we becoming—North Korea? A 'dear leader' has died and the state officially announces we must mourn? Banks, post offices and the stock market are closed to honor Bush. Will be forced to shed tears next? It’s all disgusting to me. George Bush was a war criminal who helped orchestrate 9-11 from behind the scenes with Dick Cheney. Forget his son, ‘Fredo’ Bush. ‘W’ was also a war criminal, but he was only smart enough to carry out marching orders from his dad.

The Bush Crime Family lost its leader and may they continue to slide into the oblivion of history. Gone, but we should not forget them, lest a similar family appear on the scene.

In case you’re still wondering if the Bushes are great people, please watch this video:

No more Bushes. No more Clintons!

Do Not Pay Tribute to H.W. Bush! 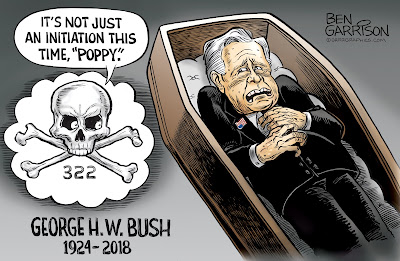 This cartoon cost us quite a few supporters. One man made it very clear to me that he lost all respect for me and that he would no longer support me…and that I was no better than Hillary Clinton and how Bush was a great, kind man and a heroic patriot and so forth blah blah blah. Why on Earth did he support me in the first place? Both Bush presidents lied to get us into war. They served the Deep State and its military industrial complex. A Kuwaiti girl testified to Congress about babies in incubators being murdered by Iraqis. Didn’t happen. She was the daughter of a Kuwaiti ambassador. A lot of people died in the war that resulted, many from cancer due to depleted uranium used in high-powered weapons.

Saddam had been promised a reward because for ten years he fought Iran, an enemy of the US. He thought he had the OK to invade Kuwait and get its oil. NO. It was a CIA trap, set by the master CIA man, Bush. He used it as an excuse to put down Iraq, and then his son later carried on and killed Saddam. (“He threatened my daddy!”). 9-11 and Bin Laden had nothing to do with Iraq, yet W lied about weapons of mass destruction to send America to war once again. Bush was an oil man and he wanted the oil. Removing Saddam the strong man only made the region more miserable and Iran stronger, and that paves the way for another war that the Deep State wants.

Both father and son were Skull & Bones men. So was Prescott Bush. That means they were sworn to power via Satanic rites and will employ ruthless means to obtain and wield power. I did not reply to the man I so greatly offended and sooner or later I’m going to offend every supporter we have because after all, nobody sees eye-to-eye on everything. Even I’ve changed my mind on issues over time. The old me would not agree with the young me.

I won’t be saluting H.W., except perhaps with the salute of a stiff mid digit. Nor will I participate in moments of silence as a tribute to him. Not that anyone will notice–I’m tucked away in the obscurity of a snowy and cold Montana.

We do depend on our supporters, however. Our Patreon support went down by 10 percent. If it weren’t for a few loyal and generous benefactors (you know who you are), I’d only be able to dash off an occasional cartoon. I’d have to beat the pavement and look for more commercial art jobs. Or look for some sort of mop job. W never had to do that. He had everything handed to him. He was the Fredo of the family, but did has he was told. If he had been born to a regular family, he’d probably have a job at a tire store or something.

The Bushes were not great men. Barbara Bush was a mean-spirited old hag. The Bushes are men of privilege, corruption and criminality. Prescott Bush was one involved in trying to overthrow the U.S. government and replace it with a Nazi system. He admired, helped, and profited from the Nazis. Their vision of a New World Order now exists under the EU. The EU oligarchy even want a European army. H.W. Bush loved the New World Order–as long as he was part of that oligarchy.

Here's a photo of him in Dallas after the Kennedy assassination. H.W. claimed he couldn't remember where he was when it happened. Really? I can remember when it happened. I was in the first grade and heard it on the playground. I still remember. Why couldn't he? Because he's a liar. He was there as a CIA man helping matters. Later when Reagan was almost assassinated, the Bushes were there, too. They were friends with the Hinkley family. A 100 million-to-one chance? I don't think so.

Let's hope the Bushes, along with their buddies the Clintons, finally fade away from the public scene entirely. --BG 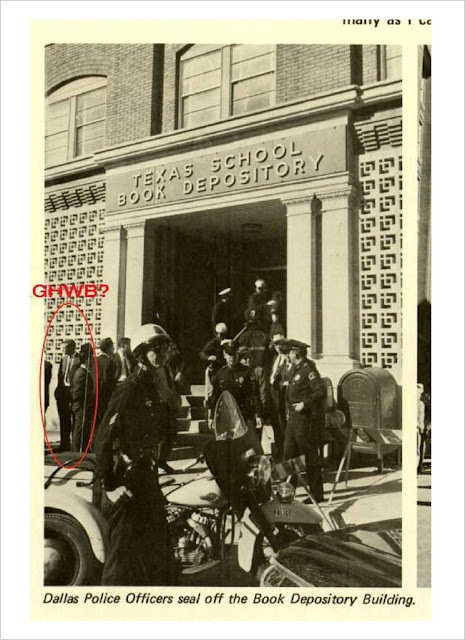 Posted by Ben Garrison at 12:31 AM No comments: