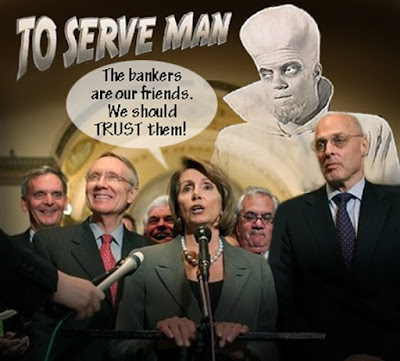 I snagged this photo tonight and messed with it a bit. It's the first thing that popped into my head. I am furious at what the greedy, super-rich, hyper-elite, power-mad Wall Street fascists are doing to our country. They are committing an outrageous crime and so far they're getting away with it. The majority of Americans oppose the obscene $700 BILLION bankster bail out bill, but our intrepid Congress just hammered out 'a deal.' How wonderful for them. Those boobs and knuckleheads actually think they're solving the problem. In fact, they're about to make it much worse while handing over more money and power to international bankers--our new and unconstitutional 4th branch of government. But, as Bush said, they can't let the Constitution ("a goddamn piece of paper!") stand in their way of bigger government, even more reckless spending, trillions more in debt and deficits and more bloody and expensive wars we can't afford. Just print up more debt and 'all is well!'

Well, things are about to get a lot worse for our country if the bill passes. All they are doing is kicking the can down the road a bit. Their cure is causing the disease. The dollar is on an express elevator to hell: Going DOWN! No worries. They can print up unlimited dollars and abuse citizens with unlimited taxes, right? What will it take for citizens to rise up and head to D.C. with pitchforks, tar and feathers? How much more abuse will we all take? Tasers? Getting 'chipped?'

Meanwhile, the fascists will soon be telling us via their propaganda arms (their MSM) how great the deal is for Americans because it brings liquidity back to the system. The Fed banksters create panic and fear to bring about their desired solution. In this case it helps them consolidate more power to the Fed fascists who run the freak show. They can now resume their credit swap gambling on our dime, only now they can also dip into brokerage accounts and probably (soon) 401k accounts that folks won't be allowed dip into. These wolves are also eating up the assets of any weak bank they can find. Just seize it. Don't ask management or shareholders or anything. JPM can cherrypick for pennies on the dollar--no questions asked! After all, they're in charge. They control the horizontal and vertical. All to the applause of their adoring sychophants in Congress, "Oh Mr. Bernanke...Oh, Secretary Paulson--you know SO much about the ECOMONY (sic)! We are so luck luck luck (chicken like) luck luck luck LUCKY to have you!"

I say we do NOTHING and let the banker bums stew. Sure, there might be bad times. There may be a recession or depression and folks will have to live within their means. Fine. Bring it on. Burn out the bad undergrowth and drive out those that screw up companies. Don't reward 'em with bail outs. Failure to bail them out now might cause us all to lose money, but better that than to lose our freedom and liberty along with it!

We need to elect people who will address the CAUSE of the problem: The Fed. Elminiate the Fed and the Income Tax. Do what Andrew Jackson did: Kick the uppity banks to the curb and start regulating them again. It's not just our right. It's our DUTY.

Where's that Ron Paul revolution when we need it?
Posted by Ben Garrison at 2:09 AM 1 comment: