Hillary would sell her soul to the Devil for money and power.

In fact, maybe she already has... 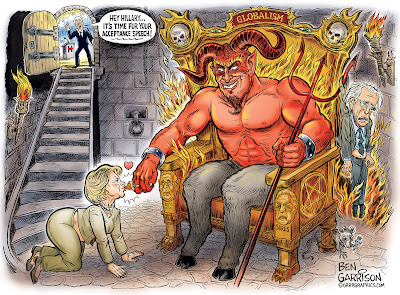 Posted by Ben Garrison at 2:14 PM No comments:

Bernie supports a liar, a criminal, a warmonger and a grifter. He wants her and her rapist husband back once again in the White House. Maybe Hillary will return the silverware she stole.
She stuck your face in corruption and election fraud and you still endorsed her. Shame on you, Bernie. Your head is up your 'ass.' 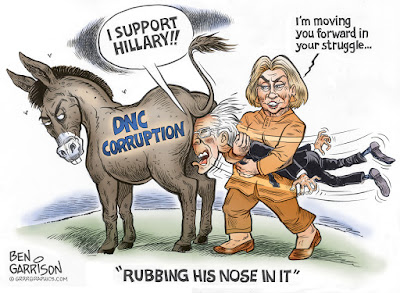 Posted by Ben Garrison at 10:52 PM No comments:

Comment
Your latest cartoon (Brexit) is beyond racist, how do you think you can get away pumping out racial hatred as if you're Joseph Goebbels?

ISLAM IS NOT A RACE. I 'get away' with it because we have a very important right called FREEDOM OF SPEECH.

WHY NOT? PC totalitarianism stifles free speech. I DO sneer at your PC bullshit.

or anthropomorphise as a shark,

Free speech and using a metaphor.

political correctness is simply the pursuit of equality for everyone.

Everyone's IQ must be rendered equal? Everyone's wealth must be made the same? Everyone's abilities must be made equal? How is this 'pursuit of equality' supposed to be carried out? By force? If not force of arms, then by hurling insults as you are doing here as well as threatening the livelihoods of those whom with you disagree.

If you do not wish to live in a society that promotes these values you are more than welcome to leave. Portraying Muslims as pirates because of the actions of a tiny fraction of Islam, depicting Angela Merkel as some kind of tyrant, and mocking Sweden, all of which simply racist beyond belief.

ISLAM is not a race. Sweden is not a race (well, not any more). J'ever hear of the 'Barbary Pirates?' You know, the ones Thomas Jefferson eliminated when he sent US Marines to Tripoli?

Not so fast--you just used a logical fallacy known as 'ad populum.' You speak for yourself--your bandwagon of 'reasonable people' does not exist.

when I say, people like you are the problem in this world.Not Muslims. Not the EU. Just small minded ignorant dinosaurs such as yourself.

I have more power than a billion Muslims as well as bureaucrats who decide the fate of business and lives in Europe? I didn't know my pen was that powerful.

If you so wish to justify your cartoon, which is clearly intended to incite racial hatred, it would be much appreciated.

My cartoon stands on its own merits. You can say it's racist a million times and I wouldn't care one whit. It has nothing to do with racism. You've shown your true colors--waving a white flag toward radical Islam as terrorists continue to commit mass murder against innocents.

Ben Garrison's reply to Ciaran Ryan over the Brexit cartoon I drew. 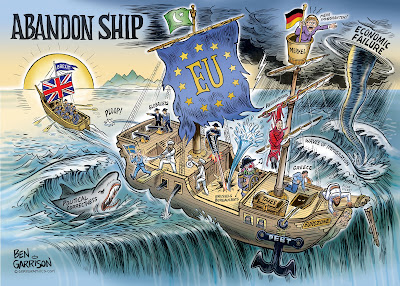 Posted by Ben Garrison at 6:49 PM No comments:

It's amusing to see how the liberal media is shocked and outraged at Trump's 'negative' speech last night. It only shows how out of touch with reality they are. The economy stinks for most working Americans whose jobs have been sent overseas. The various trade deals that benefit a few at the top has been disastrous for American citizens in general. Obama's open borders and Hillary's lust to import millions of Muslim refugees spells more disaster. College kids are burdened with debt to the tune of $1 trillion. Obama has run up the debt to over $19 trillion. Hillary is a corrupt criminal who has proven to the country that she's 'above the law.'

Yet somehow the liberal media says Trump is a bad guy because he wants to put American citizens first. Somehow that's shocking to the liberal globalist media. They say Trump is 'too negative.' No. He's too well tuned into reality.

As for Ted Cruz and Kasich...they may have blown up their own political careers by not endorsing their Republican nominee. 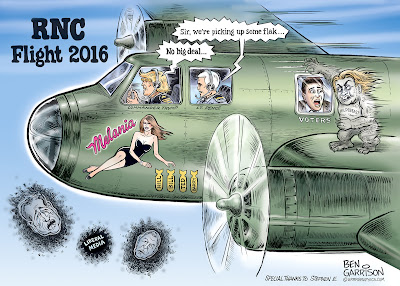 Posted by Ben Garrison at 4:28 PM No comments: 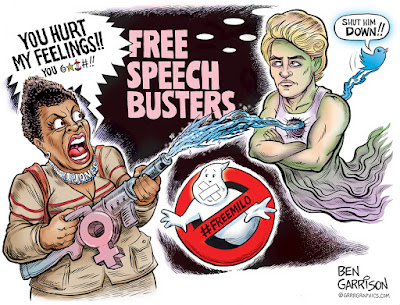 Take some advice from someone who also mishandled the trolling. It took me many years to figure out how to come to grips with it. You cannot fight the Internet Hate Machine. If you try, you’ll be doomed to failure.

Yes, I know…you were inundated with hate from trolls. Terrible stuff. I know what that’s like. I’ve been called a Nazi and racist a million times. I’ve endured terrible slurs I won’t repeat here. I’ve received death threats. I’ve been called every name in the book by both the far right and the far left. I had to deal with copyright infringement, libel and defamation and I dealt with it badly until I got wise to myself. The trolls aren’t going to change. You must change. You must laugh off the hate and harassment. It should be easier for you than it was for me. After all, you’re a comedian. You feel like you’re in a 'personal hell?’ That used to be my existence, too. At least you have many liberal allies and fellow movie stars to make you feel better. Still, if you really want to feel better on your own you must laugh off the insults and stop caring. Once you achieve that mindset, nothing can hurt you.

Free speech on the Internet is an extremely valuable right that we must not lose. Unfortunately the Internet comes with a sordid underbelly that we must tolerate to keep that free speech intact. I also once wanted revenge. I was ready to say or do anything to make it stop. I pounded the table for ‘moderation.’ Facebook found it easier to shut me up than remove my tormentors. Why? Because lately it seems right-leaning libertarians and conservatives are assigned the blame. Milo Yiannopoulos has an Oscar Wilde-like wit that can hurt the feelings of the left and social justice warriors, but he’s not a troll. Twitter was out of line shutting down his free speech. He may have hurt your feelings, but if you’re willing to be in the public eye, then criticism must be expected.

I am no fan of hate speech because it shuts down reasoned debate. Hate speech is not an argument and leads to no end except more hate. That said, if we ban hate speech outright it means there will be someone out there who gets to decide what hate speech is—and that’s a noose we don’t want to see tightened. We don’t need censors and scolds telling us what we can say and cannot say. We don’t need commissars of free speech regulating the Internet.

Do us all a favor—stop being a victim. Stop the complaining. Laugh it off. Stop caring. Step out of your personal hell. And tell Twitter to reinstate Milo’s free speech.

Posted by Ben Garrison at 12:01 AM No comments:

I receive a lot of email these days and it has gotten to the point where I can't write everyone back, but I did write this man back--he's from France. Unfortunately a lot of people who write me want their privacy, so my responses get kicked back as undeliverable.

In this case, he wanted to know if my YouTube channel was the 'real me' due to the trolls and doppelgängers who steal my name and photos. Here is my response:

Although I have not yet done much work promoting it. There are only a few videos there, but I plan on adding more. I do personally answer the comments when I can.

Yes, there are a lot of Internet trolls out there who have attacked and defamed me for years, but the dopplegänger they created is steadily losing his power. More and more people are recognizing me as the libertarian cartoonist that I am. It did take a lot of work on social media to turn things around and my wife Tina has been a big help with that.

I've always wanted to visit France and see the the famous things, but I could never afford it. I'd hate to see French culture ruined by Islam. In my opinion the two cultures are incompatible and the frequent attacks can't have a good affect on tourism there.

Trump picked his VP and there was some grumbling about it. Pence supported TPP and some of the globalism that seems to be intrinsic to the Republican Establishment. Pence comes across as an old fashioned Reagan-era conservative with added religiosity. Perhaps Trump is going after the Christian conservative vote that went to Cruz. I was hoping he’d choose more of a populist outsider such as himself. Maybe Dr. Ben Carson.

Regardless, Hillary must be stopped. She’s evil incarnate. Trump is a smart man and must know what he’s doing. There are no perfect candidates, but Hillary is a criminal and the most imperfect candidate in history. Let’s see if the Trump Train can defeat her.
Ben 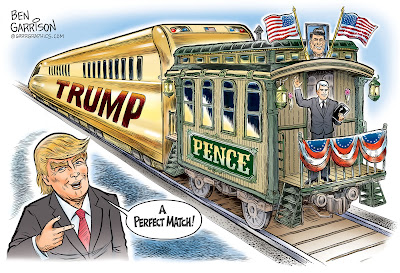 Posted by Ben Garrison at 1:12 PM No comments:

Here's a cartoon I drew after the massacre in Nice. These attacks will continue because what we're seeing is a clash of civilization. Islam and western civilization do not mix. Islam doesn't assimilate--they conquer. That's the sad fact.

Where are all the moderate Muslims? Why are they not out in streets protesting these mass murders? 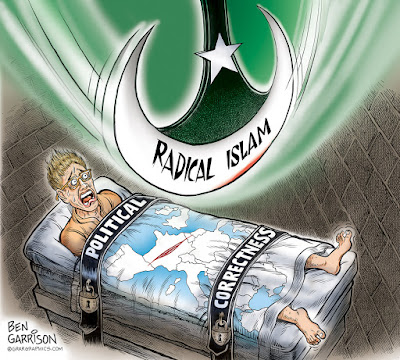 Posted by Ben Garrison at 11:10 AM No comments:

I plan on doing more shirts such as these. Yes, this is a shameless promotion, but so be it. 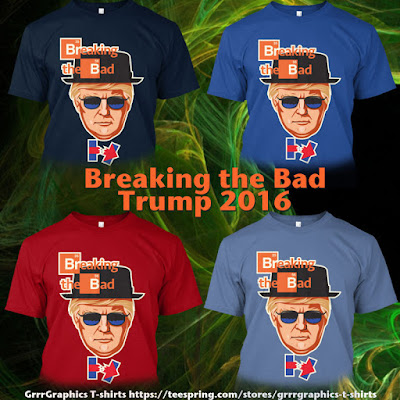 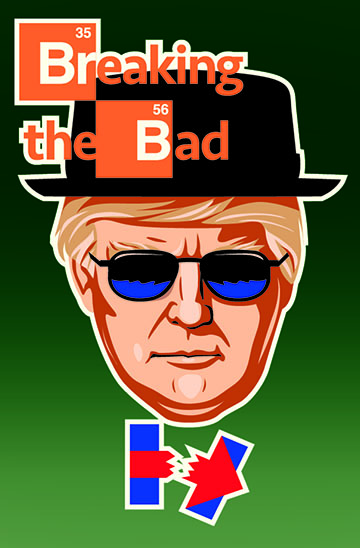 We just hit a landmark today! 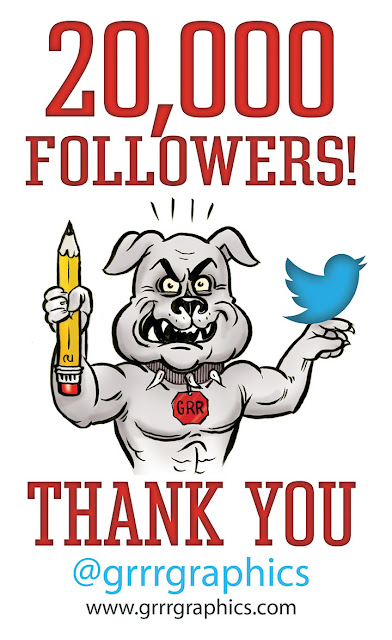 Posted by Ben Garrison at 4:03 PM No comments:

The globalist elite want to divide us. They use race as a means to bring about more hate, and thus they can usher in more control for themselves. Hillary (backed by Soros) is ready to take over the fishing Obama has been doing. She will try even harder to reel in gun control and make sure even more federalization happens. She and Soros will try new false flag lures in their tackle box to attract more tyranny.
Instead of diversity, Americans need unity—all races and creeds should come together to toss out the globalists on their collectivist ears. Starting with Hillary. 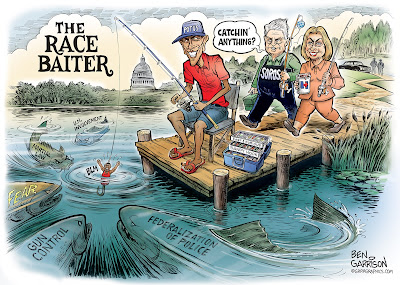 Posted by Ben Garrison at 10:40 AM No comments:

In 2011, Hillary saw Iraq as a ‘business opportunity.’ She voted for the war there and sees such conflict as a way to make money. That’s what she’s about. Power and money. Hillary has made millions from the Saudis—doing their bidding. She knows the Shiite/Sunni conflict in the middle east is a money maker for her. That’s why she announced:

“If I’m President, We Will Attack Iran… We would be Able to Totally Obliterate Them.”

We all know how she cackled with glee when she murdered Gaddafi and destabilized Libya. She made sure ISIS got weapons to attack Syria. This creature is war monger. And it’s not just the middle east. Look how she arranged a military coup in Honduras. Many may not remember that she urged Janet Reno to destroy the Koresh compound in Waco. Many people were executed there including women and children.

Hillary is a bloodthirsty, power-mad, money-mad murderer. She’s unfit to be president. She must not get elected. If she is, look for a lot more blood to be spilled in the world due to her penchant for murder.  —Ben Garrison 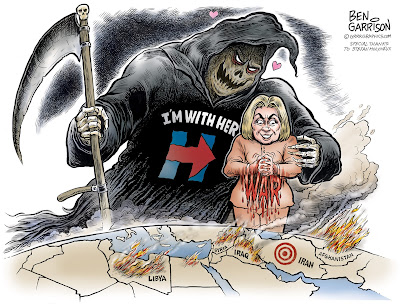 Posted by Ben Garrison at 3:42 PM No comments: