A lot of the nonsense directed toward Trump has a source: George Soros being one of them. 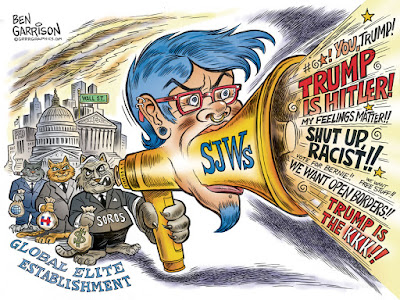 Posted by Ben Garrison at 7:53 PM No comments:

My cartoons were there, too. 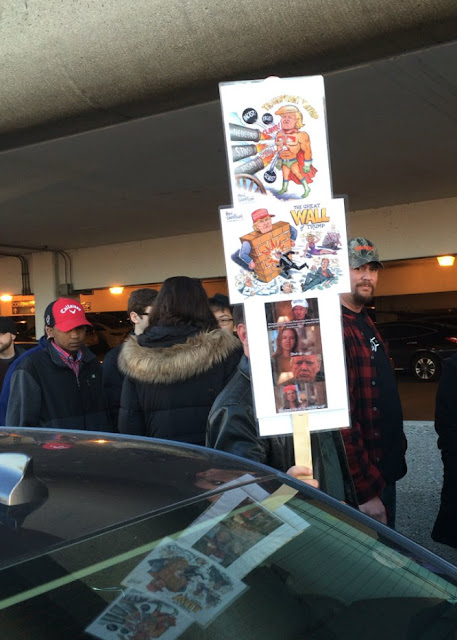 Posted by Ben Garrison at 11:39 PM No comments:

Lipstick on a Pig 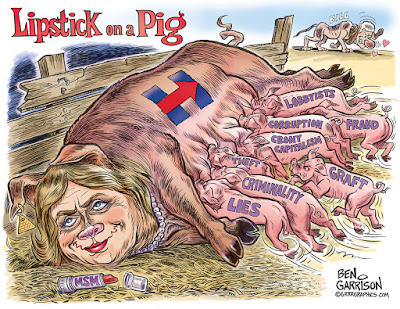 What the HELL is wrong with you? Why are you supporting this creature? Do you realize the Clintons have peddled influence? They received enormous compensation for merely speaking—money they laundered via the Clinton Foundation? Do you remember when the Clintons stole furniture and souvenirs from the White House? Didn’t you see the voter fraud in Iowa? What about the suspicious deaths that surround the Clintons including Vince Foster? Don’t you remember Travelgate, her mysterious and extremely improbabaly fortune she made from a cattle futures bet? What about Whitewater? What about her sending goons to intimidate Bill’s sexual harassment victims? What about her defense of Bill even though he has raped women? Remember how the Clintons used the IRS to go after their enemies? Their sale of high-tech weapon secrets to China? Her lack of accomplishments in the Senate? Her egregious violation of campaign finance laws? What about her lies about being ‘poor’ and coming under sniper fire? Don't you remember Benghazi? People died because of Hillary and she didn’t give a damn. “What difference at this point does it make,” is what she callously gruffed.

Do you really believe this creature? Finally, what about her violating national security by sending out thousands of illegal emails—many of which contained top-secret info?

Now you want the hillbillly grifting criminal Clintons back in White House? Really? Beware of getting what you want. Her corruption and criminality will breed even more of it. Except these pigs won’t go to the slaughter. YOU will.

Posted by Ben Garrison at 11:04 AM No comments:

I'm a little late with this post because I've been busy and my website is being revamped, but here's another podcast. Alternative media such as this one deserves your support--please follow!

This similar to the podcast I recently had with Lukas Markusson in Germany, and I say similar things, but it was a fun conversation even though I'm not a public speaker.

Posted by Ben Garrison at 12:51 PM No comments: 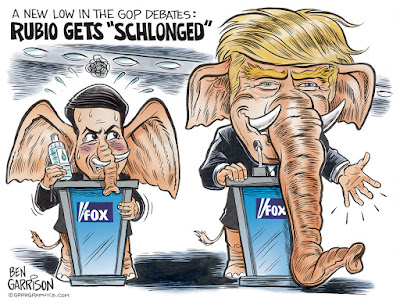 The latest GOP debate was filled with invective and personal attacks. Unfortunately, Trump rose to the bait and and attacked Rubio on a very vulgar subject that’s best left in a locker room with snapping towels.

There are some things about Trump that I simply can’t support. His cheerleading for torture is abhorrent. Let’s hope he changes his mind about that one. To be sure, ISIS (created by our government) is filled with barbarians, but that doesn't mean we need to stop being civilized ourselves. Torture is NOT reliable. People will make stuff up just to stop it.
His cry for more military spending while we already spend many times more on it than any other nation will only assure the continuance of waste while maintaining a failing empire. It should be cut along with all the other government programs. However, one person reminded me that Trump mostly wants to end government cronyism--that is, forcing contracts on the military they don't want while not providing them with the equipment they really need. This was a good point. He has also repeatedly expressed his desire to treat our veterans better and that's commendable.

His pounding the table about how much he likes the police sounds good, but too many of our police have been militarized and trained to terrorize citizens. He's so far removed from that experience that perhaps just doesn't know. The police now intimidate, shoot first and ask questions later. They routinely shoot dogs and shake down citizens for money. His support for the NSA and the Patriot Act? I can’t support that. If there’s one thing I can support the most, it’s Trump’s statement that he will audit the Federal Reserve. This has become an imperative. Cruz wants to end the IRS and I wish Trump would come out and say the same.
Let’s hope Trump begins to act more presidential and stops reacting so much to the desperate insults. That’s difficult to do because the GOP is tossing everything at him now including a dirty kitchen sink and Trump is used to pushing back. Newt Gingrich recently came out and expressed what's really going on: Trump is NOT part of the insider elite club. He's not a Bilderberg member and hasn't attended the Bohemian Grove. Unlike Hillary, he doesn't take his orders from the CFR. He's not controllable and that terrifies the plutocrats running both parties. This is the main reason I like Trump.

Trump won as predicted and at first it looked like he might sweep all the states except Texas, which is Cruz’s home state. Cruz actually took Oklahoma too, as well as Alaska. Rubio won his first primary—Minnesota.

Rubio sure does like to repeat himself. I heard him call Trump a ‘con man’ at least a dozen times Tuesday night. Trump may be saying the populist things people want to hear. Is he sincere? I guess we’ll find out once he’s elected. However, we do know that con men already populate both parties. HIllary Clinton in particular has a lot of experience with tricking people. She and her rapist husband are both grifters who will lie through their teeth to gain power and money. During her victory speech she croaked that we all need to be more ‘kind and loving.’ Sure, Hillary. Is that how you acted when you yelled at secret service men to 'pick up your f___ing bags?' Was it kindness that made you torment your hubbie’s female victims? Was it love that let prompted you to let people die in Benghazi? Was leaving a murdered Vince Foster in a park an act of love on your part? Was it kind of you to accuse an innocent and devoted man of graft so you could move your own people into the travel office? (Travelgate). It amazes me how Hillary manages to find adoring voters. Don’t people even research this woman?
I get a lot of good ideas for cartoons and many unfortunately go un-drawn because I don’t have enough time. I decided to draw this one. The 'Trump Train' has the momementum after Super Tuesday.
Ben Garrison 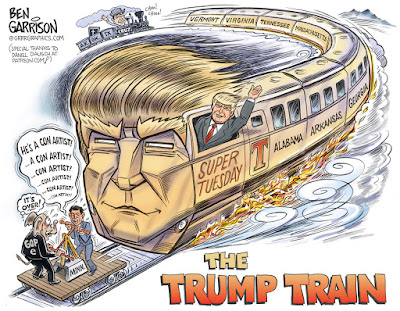 Posted by Ben Garrison at 1:53 PM No comments:

GrrrGraphics Site is Being Redesigned

Just a note to let everyone know that our main site, www.grrrgraphics.com, is under construction. A friend of ours in Seattle has offered to help us out and make it more interesting. The site will have more links, features and even a store from which we will sell prints, t-shirts, mugs and other cool stuff.

A big thanks to Cory and Tina for making this happen.

Thank you for your patience and stay tooned! 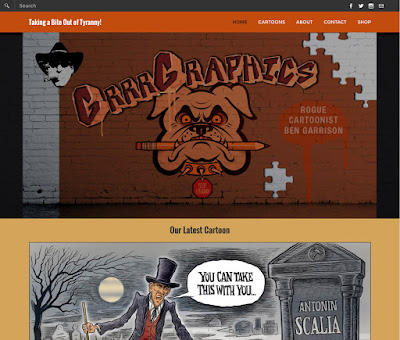 Posted by Ben Garrison at 8:53 PM No comments: