Ron Paul is doing great. We can tell by hit pieces such as this:

In it we hear pejorative and ad hominem attacks such as:

(Ron Paul's platform is) "nothing short of nuts"

"Paul has been consistently spouting this nonsense."
In other words, we are called racists for supporting Paul and the Constitution. Oh gee...I'd better vote for one of the neo cons so we can continue to start wars we can't afford and blow up innocent people to get people such as Gaddafi. We will support muslim fundamentalists to do it! Why? So we can replace leaders we don't like with radical muslims so we can...defeat the muslim fundamentalists? Yeah, that makes sense. Oh--and let's make sure America is called a battlefield and everyone give up our rights so that 'terrorists' can be whisked away and tortured. FEAR FEAR FEAR! And our own government creates false flags to get us all scared so we can give up more money, lives, liberty AND DIGNITY (groping at airports) to those at the top--you know who I'm referring to--the ones you admire, Mr. McQuaid...the big banksters ripping us all off. The Federal Reserve who has destroyed our middle class and are propping up the corrupt banks. People such as Corzine who outright steal billions of dollars from private accounts.

YOU and your ilk are 'evil nuts,' not us. I have news for you, Mr. BIG SHOT PUBLISHER JOSEPH W. McQUAID, New Hampshire Union Leader, we 'lunatic fringe' care about the Constitution and ending your ridiculous wars including the war on drugs that sends plenty of minorities to prison just because they have the wrong vegetation in their pockets. We are going to vote for Paul and end the cycle of fear they are using to strip us of our rights, our dignity, our money and our jobs just so your banker buddies can make bigger bonuses. And the traitors who are trampling our rights in Congress? THEY are the enemy--not some turbaned-guy in a cave that was sent there by the evil CIA. And what can be more anti-Semite than dropping bombs on Arab children? (Yes, Arabs are Semites, too). Sorry, Mr. Big shot McQuaid, YOU are anti-American, anti-decency and anti-Constitution. YOUR opinions are warped and truly dangerous. 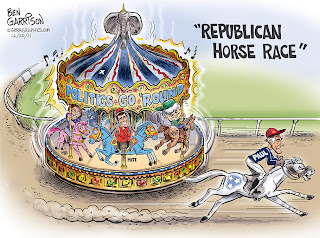 Posted by Ben Garrison at 10:47 PM No comments:

The tempo is a little faster than I've heard on other performances, but just as beautiful. Shostakovich is one of my favorite composers because...well, I'll let the music explain it for me.

The Bank of Dad is CLOSED

I drew this today for Father's Day. To all fathers everywhere, there comes a time when one must say NO to their kids when it comes to money. That way the kids come to appreciate the hard work that goes into earning money. 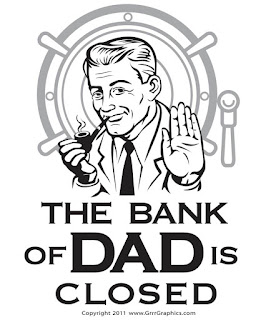 Labels: Father's Day, The Bank of Dad is Closed

Ron Paul's fund raiser yesterday was a big success. He raised well over a million bucks in one day. I was a contributor. (A small amount to many perhaps...but I wanted to help regardless).

Why I support Ron Paul:

• He wants to end the Federal Reserve, which is neither federal nor a reserve. It is an institution owned by elite private banks. The same banks that were TBTF and got bailed out so execs involved could get giant bonuses. Debt money is printed and these crony private bankers receive interest via tax money. They use their money to buy out Congress and oppress the people.

• He wants to audit the Federal Reserve. Then we'll know how much money went to international banks.

• He wants to audit Fort Knox. Is there really any gold left there or has it been stolen by Fed cronies?

• He wants to end the wars that benefit money-mad, power-mad banks and select private corporations. He voted AGAINST the war in Iraq.

• He wants to end the ridiculous and expensive 'War on Drugs.'

• He never voted to raise taxes.

• He has never voted for an unbalanced budget.

• He has never voted for federal restrictions on gun ownership.

• He has never voted to raise congressional pay.

• He voted against the pernicious Patriot Act.

• He is against the TSA.

• He is for sound money based on gold and silver.

• He wants to cut way back on nanny-state government which has continued to bloat and take away our rights.

• He is pro-Consitution and for restoring the Republic.

The Swan of Tuonela

Here's my latest painting. I took inspiration from the music of Sibelius. Namely, "The Swan of Tuonela." I had my son Ian pose as Lemminkainen. I used some reference for parts of the painting, but most of it was done directly from my imagination.

The painting (24' x 36') was done in oil using traditional methods. That is, a complete sketch transferred onto the canvas. Then a sepia wash. Then the underpainting in black and white to establish values. Then thin coats of color built up slowly until this end result.

The black swan on the Black River sings a sad song. Lemminkainen was sent to kill the swan, but the swan's song was so beautiful he was unable to do so. A Finnish god later punishes Lemminkainen for this transgression and his body was cut up and thrown into the river. His mother later rescues him and sews his body back together. Life is infused into Lemminkainen again with the help of another god and a magic drop of honey.

In Sibelius' music, the swan is represented by the English horn. 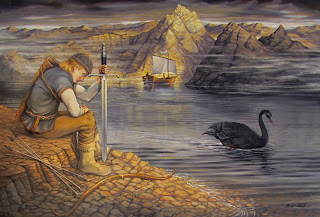 Labels: Sibelius, The Swan of Sibelius

I came across this yesterday and thought I'd post it on my blog. So I'm posting it on my blog! Get ready to lose a few hours gazing at these masterpieces from long ago...

The Web Gallery of Art is a virtual museum and searchable database of European painting and sculpture of the Romanesque, Gothic, Renaissance, Baroque, Neoclassicism, Romanticism periods (1000-1850), currently containing over 26.000 reproductions. Picture commentaries, artist biographies are available. Guided tours, period music, catalogue, free postcard and other services are provided.
Posted by Ben Garrison at 10:20 AM 4 comments: