Ignoring the Alarming Situation in Fukushima

One thing you rarely hear about in the MSM--or from Obama--is Fukushima. Multiple core meltdowns have occurred and tons of radioactive water are dumped daily into the Pacific Ocean. Yet what do Obama and Hillary want to focus on? Climate change. Why? Because climate change will enable them to push a carbon tax in order to line the capacious pockets of globalists. It aligns with Agenda 21 and other UN plans to make humans feel guilty for being alive. Do you breathe? Oh my goodness…you are putting carbon into the atmosphere. You dirty human! Pay up!

Meanwhile, nothing is done about the biggest disaster known to mankind—Fukushima. GE knew their reactors were unsafe. They knew the design was flawed and spent fuel rods have only added to the disaster. They knew it wasn’t wise to build their flawed reactors on the coast of Japan—easily exposed to tsunamis. They knew the area was prone to earthquakes. They knew and didn’t care as long as they got their short-term windfall profit. And, of course, nobody goes to jail.

It’s all about the short term and massive bucks for a few insiders. The Pacific ocean and humanity be damned. This is the mentality of those at the top—the 1/10th of 1 percent. The rest of the world can go to a radioactive hell as long as they get theirs.

Thanks to Lewis C. for his work that illustrates the point. 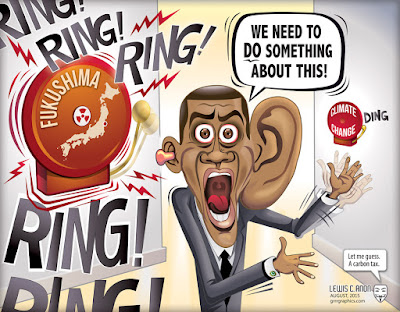 Posted by Ben Garrison at 3:34 PM No comments:

When I began drawing anti-establishment and anti-Federal Reserve cartoons, I almost immediately became the target of Internet trolls. When I complained, I was instantly accused of being against 'free speech' because I did not enjoy being libeled. I made a mistake and said hate speech was not free speech when it really isn't allowed on sites such as Facebook. (By hate speech I mean trolls calling for the death of human beings based on race and religion). By mistake, I mean I failed to qualify it as pertaining to being on social media. Hate speech is precious to many and any criticism of it automatically brings on attacks and accusations to anyone challenging it. I am for free speech and hate speech is legal in America. Regardless, the damage was done and I can't unring that bell.

When countless dopplegängers were set up on social media to impersonate me in order to make me appear as a racist nut job, I complained and wondered if it could be government operatives. When I said that, the trolls gushed howling gales of laughter and accused me of being 'paranoid.' In fact, no matter what I did or didn't do, I was vilified, ridiculed, smeared and libeled. Every cartoon I've drawn has been vandalized and turned into anti-Semitism and racism. My business was targeted. So was my family. Even my fine art was attacked. Hate mail continues to pour in whether I draw new cartoons or not. I just received one this morning calling me various names. The people sending them usually have anonymous email.

This article may help shed light on what has been happening to me.

Among the core self-identified purposes of JTRIG are two tactics: (1) to inject all sorts of false material onto the internet in order to destroy the reputation of its targets; and (2) to use social sciences and other techniques to manipulate online discourse and activism to generate outcomes it considers desirable. To see how extremist these programs are, just consider the tactics they boast of using to achieve those ends: “false flag operations” (posting material to the internet and falsely attributing it to someone else), fake victim blog posts (pretending to be a victim of the individual whose reputation they want to destroy), and posting “negative information” on various forums. - See more at: http://healthimpactnews.com/2014/internet-trolls-may-be-trained-government-agents-according-to-leaked-document/#sthash.FCvAhd57.dpuf

Trolls and Internet dissenters love to level the accusation of “CENSORSHIP!” as soon as they are restricted from carrying out their often highly orchestrated opposition to information they would love to suppress from being propagated on the Internet. Don’t fall for this ploy. - See more at: http://healthimpactnews.com/2014/internet-trolls-may-be-trained-government-agents-according-to-leaked-document/#sthash.FCvAhd57.dpuf


Posted by Ben Garrison at 3:32 PM No comments:

I got paid from Amazon today. I sold more ebooks than I expected. 38 'free' books were also downloaded by Kindle Unlimited subscribers. I'm fine with that since it helps get the word out.

Inexplicably, my printed book has made a return appearance on Amazon. I'm not sure how, and BookBaby never did answer my questions about why they failed to deliver it as promised in the first place. Apparently they have recently delivered a batch to Amazon, which now has a few copies left in stock. Maybe it was finally printed because I called BookBaby a scam and I shamed them on my blog. I doubt that kind of shaming was the reason, though. More likely, I was put off BookBaby's radar after they got my money and then, four or five months later, they finally got around to printing a few of my books. Who knows.

Even if I do sell a few printed versions, I doubt I'll ever see a dime. BookBaby is notorious for not paying royalties to authors and my royalty is a pittance. At least Amazon gives me a better royalty on the ebook. 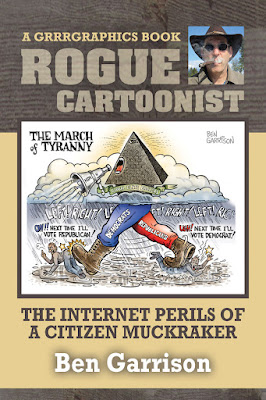 Posted by Ben Garrison at 2:58 PM No comments:

I was asked a question today...where do I stand when it comes to anti-Semitism. I've already answered this question many times, but here I go again:

I despise anti-Semitism and racism and I always have. I explain this in some depth in my book "Rogue Cartoonist," which few have read. I am against the Federal Reserve and central bankers. My cartoons lambast corruption based on the deeds of men--NOT their race or religion. Because I do not attack 'the Jews,' many far right-wing and Nazi trolls (Andrew Anglin, 4chan, etc) decided to punish me. They began vandalizing my cartoons and altering them into anti-Semitism and racism. Their hate speech garbage now often trumps my own original work on search engines.

At the very least they've muddied the waters to such a degree that my freedom of speech has been nullified. Each and every cartoon I've drawn has been defaced into libel. Since I'm not a public figure, many have been fooled into believing the libel as being true. It's not true.

I've lost many commercial art clients and my business has suffered. I never had a chance to explain to them my predicament. It's also very embarrassing to have to tell people what has been happening--it's like trying to convince someone that no, I don't beat my wife.

I realize that many Jews got into banking because they had few alternatives. Many trades were closed to Jews around the middle ages and Christians forbade 'usury'...and so Jews began banking in order to survive. I also realize many bankers such as the Rothschilds happened to be Jewish. Again, I denounce deeds...NOT religion and many Jews aren't bankers, but middle class people just trying to make a living.

I worked at several newspapers during my 20 year career as a journalist and I met many very smart, kind Jewish people--including my friend Steve Greenberg who has a very sharp sense of humor. I disagree with a lot of what he pens, but I admire his devotion to his craft. Most of all, I want to assure you that there are plenty of Libertarians out there who are neither racist nor anti-Semitic. We believe that government has grown too large, too dictatorial and too corrupt. We want freedom for ALL--including those of all races and religions.

Libertarians are not uniform in their views. Some are religious and some aren't (I'm not). Some support Israel and some don't. (I do--the last time I heard Israel isn't using 10 year old children to cut off the heads of those with whom they disagree). Some support gay marriage and some don't. (I do). The MSM delight in painting us as bigoted kooks. Regardless, I will continue to speak out against anti-Semitism and racism. I believe all races and creeds need to speak out against statism and in the case of the US., realize that our government has been stolen from us. The government WANTS us divided and if we dare speak out against open corruption we are called names such as 'racist!'

Our government, the media and most of public education are now in the control of global corporations/lobbyists and central bankers. Go against that agenda and expect flak. I've received plenty. I know many disagree with my political views and that's fine. What's not fine is destroying someone's reputation through libel and defamation.--Ben Garrison

Posted by Ben Garrison at 7:39 PM No comments:

When it read G. Edward Griffin's book years ago, it really opened my eyes. All Americans need to read it. ("The Creature from Jekyll Island").

GREECE IS NOW A GERMAN COLONY

Will the Greek people revolt? It remains to be seen...

They just gave away their democracy to the central banksters. NOW...the EU can strip bank accounts, seize infrastructure, raise taxes, pare down pensions and impose slave-like austerity on the people. They owed the banks money, after all! Shame on them! Oh wait--what happened when the elite banks THEMSELVES got into trouble? Oh well...we taxpayers had to bail THEM out to the tune of $16 trillion. It's a double standard.

Also, the debt problem isn’t going away. It’s still there. The Greeks got ZERO in concessions! Sort of like Obama’s deal with Iran. He gave them the store and got nothing in return.

Please, Greek people...start rioting. Don't take this coup by the 1/10th of 1 percent who own and control nearly everything...now they want to turn you into their slaves. STAND UP! REVOLT!

Oh--by the way, this will soon be coming to America, too.
Posted by Ben Garrison at 5:50 PM No comments:

Abe Lincoln: What They WON'T Teach in School

The real Lincoln wanted power and money. He was controlled by big railroad money. He was a racist and a tyrant. He marked the point where states' rights were usurped by a strong, central government. Lincoln led the country away from Jeffersonian principles and toward empire. He also caused at least 600,000 Americans to die.
Posted by Ben Garrison at 4:54 PM No comments:

Here's my political compass. Some may say after looking at it that I'm not really a libertarian. They can think whatever they want--that's their prerogative. Many libertarians disagree on some of the issues listed in the test. For example, I for one do not condone spanking children. I also don't like abortion, but it's folly to pass laws to stop it.

I'm surprised my dot wasn't closer to the bottom center, but so be it. It's just a test and it has its limitations. 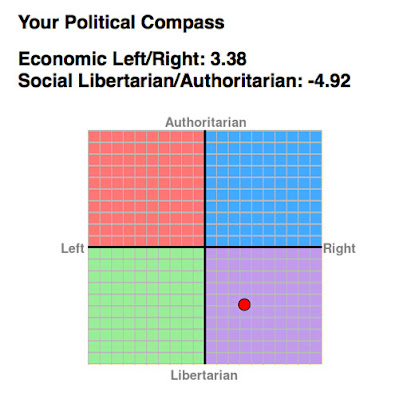 UPDATE: Someone told me the above test tends to make libertarians look more right wing and authoritarian than they are. So here is a better, more accurate test: 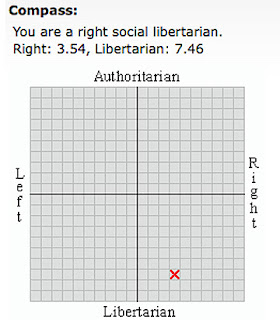 Posted by Ben Garrison at 7:24 PM No comments:

Found out that I sold another painting at my gallery, ArtFusion, in Bigfork. It's the fastest I've ever sold a painting and my congrats to the buyer. I'm currently working on a large painting of a old west poker game--in my cubist style, of course.

Interest is building for my work and I KNOW what I'm doing is good stuff. I'm not bragging...it's just that after a long career as an artist I know what path on which I want to travel. I know. It's too bad this didn't occur when I was 30 instead of now when I'm pushing 60. Regardless, I plan on making use of the time I have left and I will paint some unique visions. 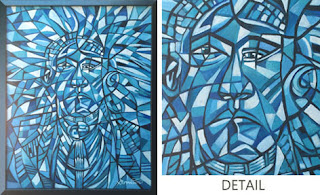 Posted by Ben Garrison at 11:02 AM No comments: