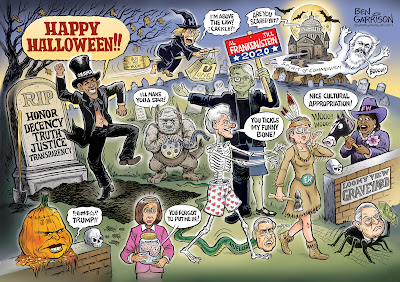 Halloween is upon us once again and GrrrGraphics.com is flaunting the haunting! Our annual cartoon offers a potpourri of twits and treats. It features creepy characters such as a McCain-o-Lantern and Obama as a happy undertaker. He enjoys dancing on a grave of deeply-buried virtues. Obama’s evil jig of socialism could summon the spirit of Karl Marx himself.

Cankles is cackling, bats are battering, and troubles are toiling. Elizabeth Warren violates SJW sensibilities by dressing up as an Indian. “Poca-haunt-us” has a lot of nerve! She’s attracted the lascivious attention of Bill “Bare Bones” Clinton.
And what would Halloween be without Frankenstein? Yes, the monster is here in all his and her glory. Frankenstein would make a great name for a presidential bid!
Nancy Pelosi forgot to put in her brain and Robert Mueller continues to slither about in search of an indictment. George Soros is a spider who uses his money to weave a dark web of globalism. It’s not all about politics, either. We also feature that debonair ladies' man himself: Hollywood Harvey Weinstein as the Wolf Man.
Last, and least...Frederica Wilson comes as herself.
--Ben Garrison
Posted by Ben Garrison at 5:05 PM No comments:

Thank you to all of our supporters and followers! 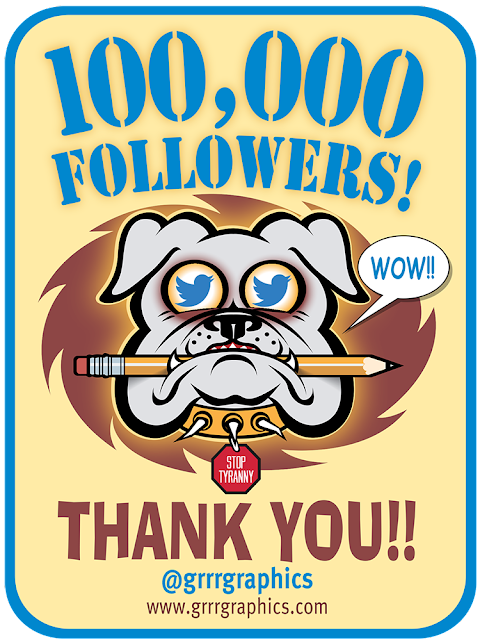 Posted by Ben Garrison at 10:51 AM No comments: 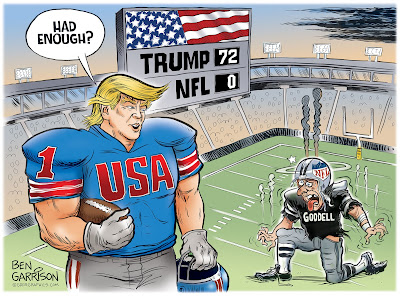 The NFL needs its fans a lot more than the fans need the NFL.
Commissioner Roger Goodell is just starting to figure this out as the decline in attendance and TV viewers continue to wane.
“Dilbert” cartoonist Scott Adams called it right. President Trump can’t lose this debate because “gravity is on his side.”
After Trump denounced the kneelers, more kneelers came out to virtue signal merely to ‘resist’ the president, thus enraging their fans even more. Too many players went full-SJW mode, apparently not caring that most of their fans do not support socialism, the Antifa or Black Lives Matter. They simply want to watch a football game and be entertained while suspending disbelief long enough to pretend that their support of their team somehow ties them in tribally with that team.
The kneelers shattered that illusion. Many fans began to realize they had nothing in common whatsoever with most of the spoiled millionaire players who continue to publicly display contempt for their country, their flag and their fans. (Now ex-fans) Why support players who hate you?
Roger Goodell showed abject weakness from the very beginning by not decisively punishing Kaepernick for kneeling during the anthem and now the subversive virus has spread. It remains to be seen if he will be able to quell the protests. Yes, we are guaranteed free speech in our Constitution, but that doesn’t mean we are guaranteed not to suffer the consequences of our free speech.
If an employee routinely insulted customers, his boss can fire him because he knows it hurts the business. How much more the NFL will suffer remains to be seen, but many fans will not return. After making his “every one should stand for the National Anthem “ statement, Roger Goodell said Wednesday that “there has been no policy change” regarding players standing for the national anthem before games. Yet another fumble by the NFL.
Trump’s swift kick to the NFL’s bottom line got their attention. Now will they stand to attention? Stay tooned.
—Ben Garrison
Posted by Ben Garrison at 11:46 AM No comments:

If you go to my YouTube channel, you'll see I've begun some short, simple videos designed to help beginning cartoonists.

I'm not a video expert and the quality isn't top-notch, but I did the best I could. Shown here is a photo taken from the end result of the third video. 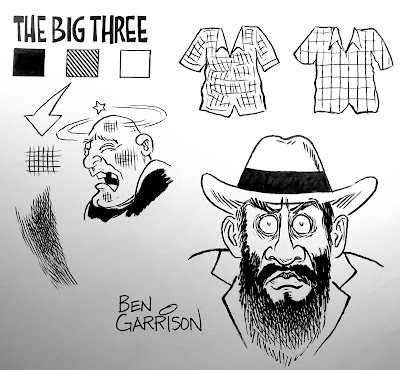 Posted by Ben Garrison at 2:53 PM No comments: