Read this claptrap from HuffPo:


"Politico reported Wednesday that Ben Garrison, a fringe conservative cartoonist, had been uninvited from the event after reporters dug up his anti-Semitic cartoon depicting the Rothschild family and billionaire investor George Soros ― all Jews ― as puppet masters. Critics called out event organizers for including Garrison in the first place. What did it say about the White House that an outspoken racist was invited to represent conservative social media?"

1. I'm an independent cartoonist. 'Fringe' is a pejorative word designed to make me sound like a weirdo.

2. You didn't have to dig up that cartoon. We have it on our site. We aren't ashamed of it. We aren't hiding anything. It took no digging to find it, you lazy liars.

3. I criticize the Rothschilds for inflicting their fractional reserve/central banking debt money on us all--and that includes hard working Jews. If I were anti-Semitic, I would have labeled that hand "Jews." You and Politico are libeling me, HuffPo.

4. Why did you say 'all Jews' when you are alluding to only two of them. Shouldn't it be 'both' instead of all? You did that intentionally for drama and to aggrandize the false outrage.

5. "Outspoken racist." Please show me where I said anything racist, you lying liars.

Here's a photo from the party held in a banquet room at the Trump International Hotel. I met nearly everyone here except for the woman in the center with the fancy dress. I think she's a singer. I didn't want to wear my hat, but Tina said it was part of my meme and I should keep it on, and as it turned out you wouldn't know I'm here if it weren't for my hat standing out. Anyway, there were a lot of young people there who were very smart, well spoken and many looked like movie stars to me. The guy with his thumbs up looked a lot like Sammy Davis Jr.

These mostly young people give me hope for the future. Some know more about what's going on than I do.

The man on the very far left made sure I was invited. He's the famous meme master 'Carpe Donktum' and I gave him a proof copy of our coffee table book that originally I had intended to give the president. He was very happy to get it. I talked to the man in the red tie from "Mad Liberals" and he's a freaking genius at putting together meme videos.

I had a good time and toward the end a man who hadn't been at the party came suddenly came up to me and told me he loved my cartoons. He was associated with the White House in some capacity (my addled brain no longer remembers his name) and he told me that the president himself wanted me at the summit. Then things went awry, but oh well. It was still nice to hear since I wasn't sure the president even knew who I was.

OH-the guy seen left of me in the photo is Mark Dice. I did a commissioned cartoon for him once. He was fun to talk to as well. The young lady in the white shirt is Millie Weaver from InfoWars. 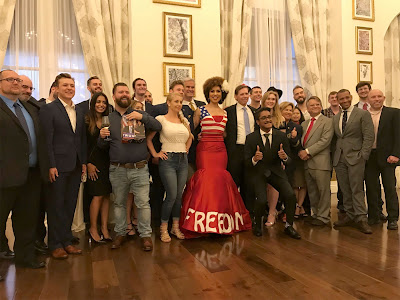 Posted by Ben Garrison at 12:06 PM No comments:

No, I'm Not Anti-Semitic!

I’m back from my whirlwind trip to our nation’s capital. As my supporters know, I was invited to visit the White House to join my peers, otherwise known as ‘influencers’ on the Internet and discuss the ongoing and increased censorship of conservative voices. Then I got censored from the summit on censorship.
Some have said I brought it on myself by announcing the invitation I received from the president. I can’t disagree with that assessment now, but at the time we at GrrrGraphics were bursting with excitement. We wanted to share the news with those who have helped us. After all, our supporters were the ones who would make such a trip possible. There would have been no way I could afford to go without them, and it was an expensive trip.
My old suit was 20 years old and I could no longer fit in it. So I bought a nice new suit and new shoes. I had to buy plane tickets and since they weren’t purchased well in advance they weren’t cheap—even though I got the cheapest, ‘basic economy’ tickets I could find. (It would also mean that later I could not cancel and get my money back). I was going to stay at the cheapest hotel I could find too, but my wife correctly stated that if I’m going to see the president I needed to stay at his hotel. So I did. It cost well over $300 per night. At the end, it cost us a small fortune. The taxi fare to and from Dulles Airport was very expensive. After I arrived at the hotel I was hungry and so got myself a steak dinner. Along with one martini added in, the tab came to $88. Plus tip. On my final night there I decided to scrimp and just eat an appetizer. That came to $28 for a shrimp cocktail containing four shrimp, but at least it was artfully presented.
The expense would have been worth it had I been able to see the president in person as planned. Alas, it was not to be. The ADL made sure of that. The Anti Defamation League is an organization designed to thwart bigotry and hate toward Jewish people. They try to punish anyone who might express sentiments by means of public condemnation and shame. In other words, their mission to end ‘hate speech’ is brought about by controlling free speech. They’re now an official censor. How in the hell did that happen?
Out of all the cartoons I’ve drawn over the last ten years, the ADL focussed on a single cartoon drawn by me. It was commissioned by Mike Cernovich, who helped us out a lot during a time when we needed help the most. After he published the cartoon, he immediately received flak and as a result he cropped out the controlling hand at the top. Since it was his cartoon it was his prerogative, but the uncropped version remains on our website. I will not apologize for it, because there’s nothing to apologize for. It’s also featured in my latest coffee table book, which will be sent out later this summer to all those who bought it in advance.
The cartoon was used by the ADL as ‘proof’ of my ‘blatant anti-Semitism.’ Since I was going to the White House the biased corporate media soon piled on and breathlessly repeated the smear, and the word ‘blatant.’ It wasn’t blatant and it wasn’t anti-Semitic. It was anti-central banking and globalism. Regardless, Jake Tapper did a gleeful tap dance as he played the ‘Gotcha!’ game. The fake news media made a huge something out of literally nothing.
As a result, a White House representative called me. They were wondering if my presence would be too much of a ‘distraction.' I didn’t pick up on their cue at first. “Oh no, don’t worry about it, it’s just a tempest in a teapot—I’m still happy to be coming.” Silly me. I didn’t pick up their real intent. I was being asked to voluntarily withdraw so the president wouldn’t be seen as the one who kicked me out. They wanted me to kick myself out for the good of the summit and so I did. My only proviso to them was that it all be kept silent. I would not tell anyone and the White House wouldn’t mention I wasn’t going to be there either. The media could all twist in their collectivist wind.
But that’s not what happened. Instead they quickly caught wind that I wasn’t going and gleefully howled about their victory. Did they find out from someone at the White House? That’s what I thought at first and I felt betrayed and angry. I was on CNN International News. It was said Trump was doing the right thing by banning an ‘obvious’ anti-Semitic person such as me. Later the White House denied they leaked the story and that they were engaged in ‘fake news’ speculation. Really? What an obfuscated mess! My reputation was trampled upon mercilessly. Like that scene played by Al Pacino in “Scarface,” I was the ‘bad guy.’
https://www.youtube.com/watch?v=dW37AGZ0Pj0&fbclid=IwAR2RFOYQ_Hcz2x-Y8ZmrTBZ7JRXaG8TEt2I7zN0Xyv_6vBaqaE8lqwp-gQ8
"What you lookin' at? You're all a bunch of fuckin' assholes. You know why? You don't have the guts to be what you wanna be. You need people like me. You need people like me so you can point your fuckin' fingers and say, "That's the bad guy.”

The ADL needs people like me. They need to point a hectoring finger of attention to someone who they can claim is an anti-Semitic monster. Someone who is a purveyor of hate and potential harm to Jewish people. They capitalize on that fear to draw in millions of dollars in donations, which helps bring them power and more influence. I was held up as their ‘bad guy.’ Their evidence? I labeled a sinister hand with the word, “Rothschilds.”
I put that same word on another cartoon. The ‘R’s were featured in a vast swamp that also showed President Trump, who was just starting to drain it. Why didn’t they focus on that cartoon? Because it portrayed Trump in a positive light. Instead, they riveted attention toward the classic puppet/string metaphor, which they claimed in and of itself was anti-Semitic. This link will show you their take on it:
https://www.adl.org/blog/anti-semitism-used-in-attack-against-national-security-adviser-h-r-mcmaster
This is the supposed evidence that made me into their ‘bad guy.’ They’re wrong. If I were really anti-Semitic, I would have written the word “Jews” on the hand. I didn’t. I don’t go after people based on their race or religion. I criticize people for what they do. What did the Rothschilds do? For centuries, they’ve dominated global finance. It’s a family that pushed a globalist agenda while manipulating countries and currencies. They’ve urged countries to go to war with each other, while profiting on both sides. The Rothschilds virtually invented central and fractional reserve banking and were instrumental in the formation of the Federal Reserve debt money system. JP Morgan did their bidding.
They say the ‘R' family today has dissipated their wealth and are no longer a factor. If that’s the case, why all the fuss? It is said we know who is really running the show when we find out whom we cannot discuss. We can’t talk about the Rothschilds. They are protected by a red shield—their ‘anti-Semitism’ accusation shield.
It’s hard to find out what the Rothschilds are currently worth. An internet search would show that the ‘R’ family has little wealth today. They’ve fallen on hard times! Stop attacking those poor people! In actuality, a small number of families control 40 percent of the world’s wealth. You can’t mention these families without getting attacked. I suspect the ‘R’s’ are still trillionaires, but their wealth is hidden by trust funds and such. Regardless, the cartoon represents the globalist central bankers that pull the strings of Soros and it’s getting to the point now where you can no longer mention George’s last name in a negative light without getting called anti-you-know-who.
I’m not anti-Semitic and I’ve never drawn a single anti-Semitic cartoon. The Rothschilds are public and historical figures that should not be immune to criticism. Their debt money system hurts us all—including average and hard working Jews! If the ADL wants to imagine sinister things about me and claim my cartoons are dogwhistles for anti-Semitism, then they should state that as opinion, not fact. Unfortunately their opinion is treated as fact by the mainstream media. As a result, I was viciously libeled. It has cost me my reputation and a lot of money. It also cost me a chance to see the president.
—Ben Garrison 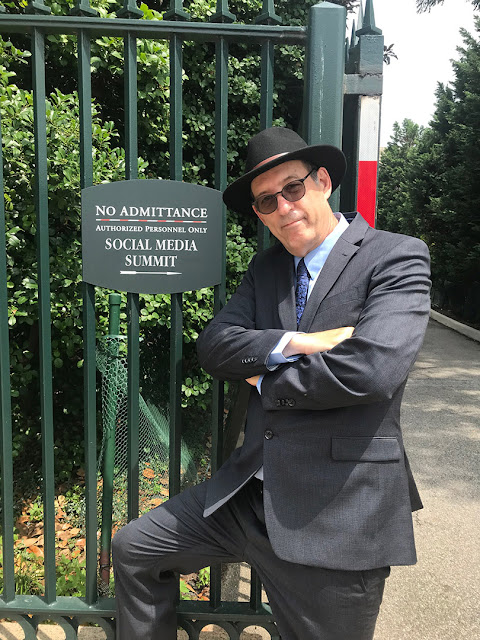 Posted by Ben Garrison at 6:08 AM No comments: