I remember watching a debate in which McCain couldn't help but laugh at Ron Paul. McCain's contemptuousness made me very angry, but he was low in the polls and I didn't think he had much of a chance. I was wrong. McCain was smug because he knew it was in the bag. The Rove-led neocons who controlled the GOP made sure 'their guy' began winning primaries. They rigged elections to make sure Ron Paul didn't win.

Now they want to do the same against Trump and they are failing. Their men, Jeb and Rubio, aren't faring well. It remains to be seen if they can again steal primaries from their smoke-filled back rooms. There are a lot of people like me who are fed up with the Clinton and Bush machines. The donkey and elephant clichés now have competition: A lion. 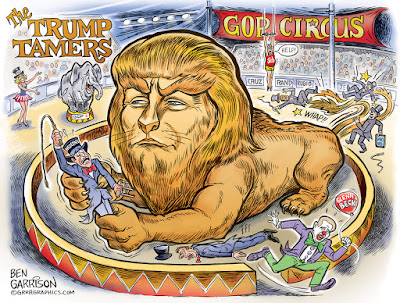 UPDATE: The original of this cartoon is available on eBay and I'm very pleasantly surprised by how much it has been bid up. Wow! My original cartoons are drawn on a large sheet of cold pressed bristol board. I lay down a pencil sketch and then ink it in. After the pencil lines are erased, I scan the cartoon to the computer and color it in Photoshop. A few tweaks and changes are made in Photoshop. So when I sell originals, they must be first hand-colored. The response has been excellent--every one of them has been sold on eBay. The auction ends soon and this one is setting a record. Hurrah! 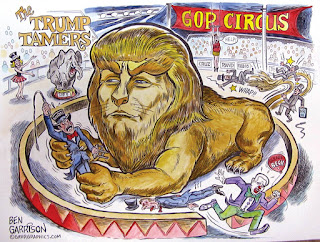 Posted by Ben Garrison at 1:13 PM No comments:

Considering the snow piling up on the east coast, I thought I'd publish this cartoon early. Groundhog Day is supposed to determine whether or not we're in for a long winter.

If Hillary is elected, we'll get that long winter. She's a lying criminal who should be in prison. She may instead be rewarded with the presidency because after all, she's in a caste that is 'above the law.' If she did acknowledge her own shadow, she'd probably be proud of it. 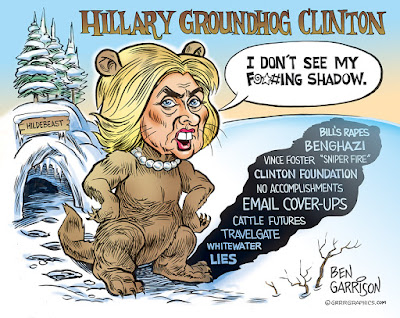 Posted by Ben Garrison at 5:23 PM No comments: 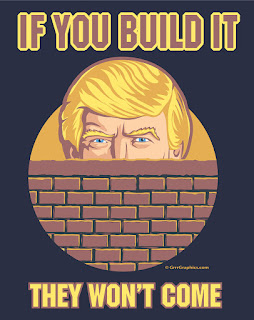 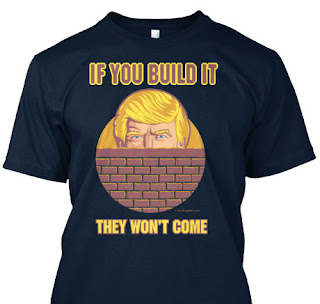 A new t-shirt featuring Trump and the wall. A country isn't a country if there are no borders. It's time to enforce the law. People coming to this country must do it legally. There's nothing racist about that.

ALSO....a shirt with the portrait only. 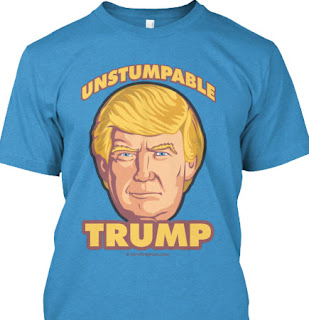 Posted by Ben Garrison at 8:19 PM No comments: 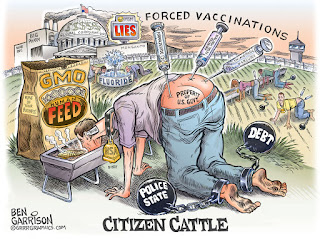 Would you like to own one of my original cartoons? Here's your chance. 'Citizen Cattle' is available on eBay.

My cartoons are done in black in white and scanned into Photoshop--where I color them. Therefore, this original is also hand-colored. By me.

Thanks to all of those who have bought my prints, t-shirts and original toons (especially one guy--you know who you are!). Purchases such as these (and help from my Patreon members) really makes a difference.

UPDATE: It has been sold...but there will be more.
Posted by Ben Garrison at 2:33 PM No comments: 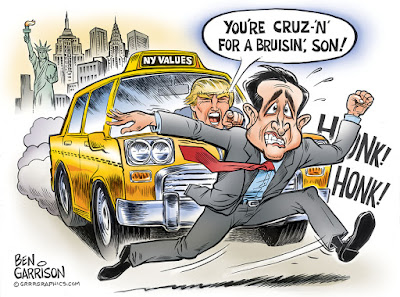 Ted Cruz had nothing to lose by criticizing Trump’s so-called “New York values.” Perhaps he thought it would make him look less like a big city poltician to the farmers in Iowa. Trump may have made too much of it, but it added spice to an already good debate. It’s just too bad Rand Paul was left out. Surely he should be there ahead of Kasich and the round man, Christie. Rand wants to audit the Federal Reserve and he made time to vote on the bill, unlike Cruz. Even Bernie Sanders found the time to vote to audit the Fed. C’mon Cruz…if you really want to appear presidential, start talking about auditing and then ending the corrupt Federal Reserve!
—Ben Garrison
Posted by Ben Garrison at 9:03 AM No comments:

By popular demand, here's another t-shirt featuring Trump and his many expressions. It's fun to draw Trump. 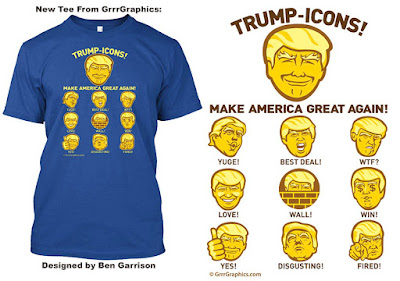 NEW: T-shirts are now available in various sizes and colors. Please click here. I had been using 'Zazzle,' but I only make a tiny royalty from each sale there. On this site, they are more equitable. I plan on adding to the stock as I draw more cartoons!--BG 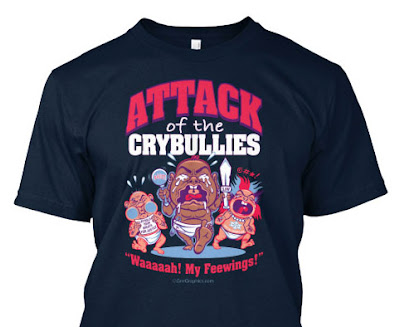 https://teespring.com/stores/grrrgraphics-t-shirts
Posted by Ben Garrison at 12:00 PM No comments:

My cartoon already has plenty of labels, so I will keep this short. “SHALL NOT BE INFRINGED.” 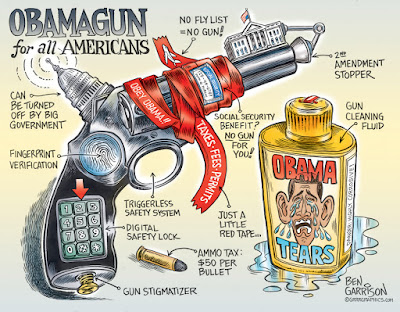 Posted by Ben Garrison at 9:35 AM No comments:

GrrrGraphics on the Internet Sea 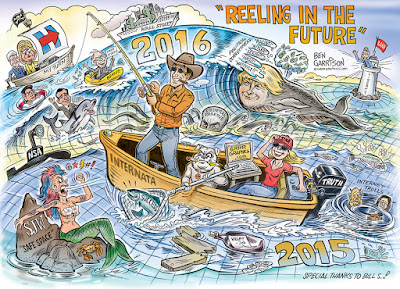 A cartoon to start the new year.

One of our Patreon supporters suggested I draw a cartoon showing me fishing for ideas on the Internet Sea--so I did! In 2015 we put the trolls behind us. Notice the 'Trumpback whale!' 2016 is a wave of endless cartoon possibilities. Stay tuned! 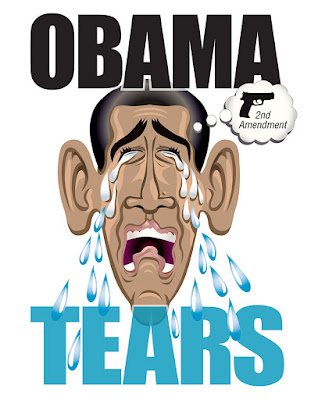 Buy the coffee mug on Dazzle!

Or buy the T-shirt on Dazzle! 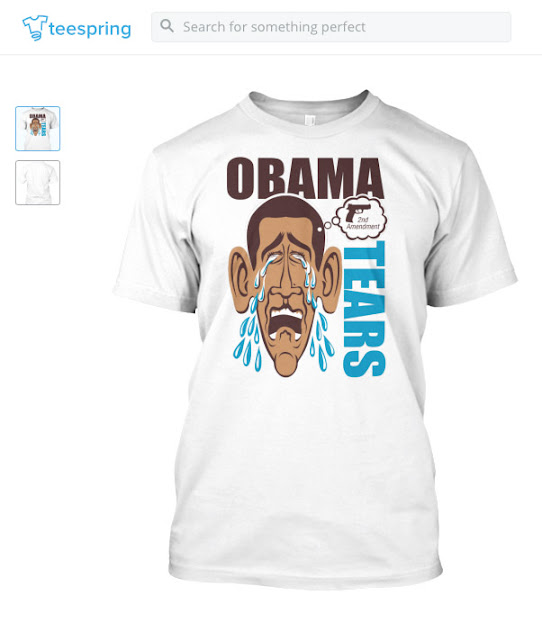 Like our cartoons? You can help offset our costs by becoming a supporter on Patreon for as little as a dollar a MONTH- ($12 bucks a year!) or by making a donation at our website GrrrGraphics.com. You can also buy original cartoons and signed prints on ebay. Click here to follow us on ebay!

Posted by Ben Garrison at 2:00 PM No comments:

It looks like the old neocon fake conservatives running the Republican party will continue to lose their grip in 2016. That's good!

No more Bushes. No more Clintons. 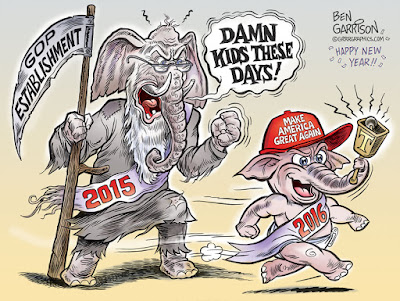 Posted by Ben Garrison at 12:24 AM No comments: