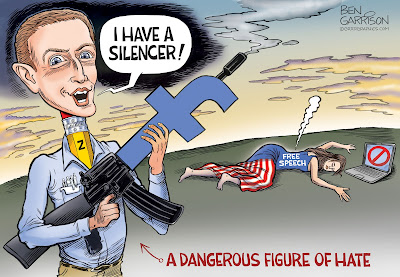 Facebook claims it has ‘community standards’ enforced to remove hate speech. In part one of this two part cartoon series, I proved that was a lie. To refresh memories, see the screen shot image at the end of this post as another example. Bear in mind that a Facebook spokesman recently said this:
“We’ve always banned individuals or organizations that promote or engage in violence and hate, regardless of ideology,”
What I reported was clearly a ‘hate speech’ page, even though they were using my cartoons which they vandalized to express their quest for murder. Facebook, as usual, said it did not violate their community standards. As long as conservatives are made to look like monsters, Zuckerberg seemed to be A-OK with it.

Now the CEO of Facebook is blatantly censoring conservative people such as Alex Jones, Paul Joseph Watson, Milo Yiannopoulos, and Laura Loomer. Facebook will not even allow on ‘his’ site praise for these people by others. Zuckerberg wants them digitally erased from history. He labeled them ‘dangerous individuals.’ The lefty media teamed up and parroted the defamation, calling them ‘controversial figures of hate.’ It’s all ridiculous, but at least Facebook’s lies have been exposed. We know how the Deep State, including the CIA and Silicon Valley, consider those of us who want to preserve our Republic to be ‘figures of hate.’
Silicon Valley companies will increasingly allow conservatives to be banned as we approach the 2020 election. What’s next, will they call us ‘terrorists?’ Will we be sent to gulags? Facebook now has around 2.7 billion users. People depend on it to easily connect with friends and family. It has become a public utility of sorts and it all may have started with CIA funding.
Before you call me a conspiracy theorist, consider that the CIA has for a long time been funding Silicon Valley tech companies that interest them. They created a venture capital firm called “In-Q-Tel,” and that firm helped fund many up-and-comers including Peter Thiel’s “Palantir,” which was an all-encompassing means to gather data on everything. Although Thiel is a self-professed ‘libertarian,’ his Palantir destroys privacy. It is literally the Eye of Sauron. In the hands of the CIA, it would make that institution that much more powerful and tyrannical. Thiel may have also recommended funding for Facebook. He got in early and made a large part of his billions through Facebook stock. The CIA must love their honeypot that is Facebook. After all, billions of people voluntarily release their personal details. Zuckerberg loves it because he sells the dumb effers' data to advertisers. Facebook users are also the product. Zuckerberg is the pefect nerdy front man for the CIA. As a bonus, Zuckerberg spent some time at Harvard, which is a known and very corrupt pipeline feeding the Deep State Swamp.
Now the billionaire tyrant wants to introduce a social credit system that rewards users for politically correct behavior on his platform. It sounds suspiciously similar to China’s system, designed to keep their citizens in line. Everyone there wants a high rating. Those with low ratings are unable to travel, get a loan, or even get a job. Zuckerberg wants that for Americans.
The CIA commands way too much power and control and they always want more. I doubt many taxpayers know they are funding their own enslavement by allowing a ‘security’ agency to fund Silicon Valley companies, who now control most of our digital free speech. The CIA seems to love billionaires like Zuckerberg, Soros, and Bezos, who are working together to silence patriots who value freedom.
—Ben Garrison 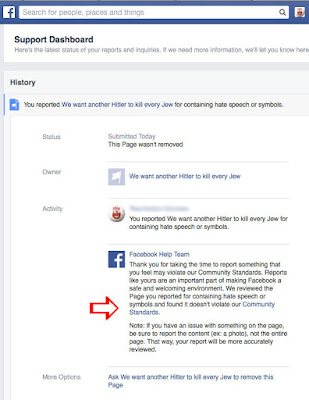