Anglin the Coward is At It Again...

A troll named Andrew Anglin continues to attack me on his hate site. He is asking his followers to send out tweets using my face and signature pasted onto a long racist hate screed. This is a cowardly tactic from a troubled young man who claims he's not violent, yet he invents straw men to cry out for mass murder.

He does this for 'lulz.' I doubt he's even a Nazi as he claims. He does it for laughs and donations. His site is a cartoon of hate that appeals to those lacking in humanity and intelligence. He enjoys fooling people into thinking he's a Nazi--thereby profiting from his enterprise. He has figured out how to make a living from trolling.

Bear in mind that if you see hateful images and words attached to my face and signature, it's the work of trolls like little Anglin. --Ben Garrison 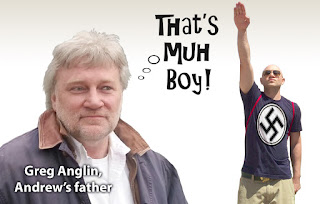